CNN's Dana Bash fact-checked President Obama's falsehood about the sequester on Friday, but the major networks didn't exactly follow CNN's lead in reporting the distortion that Capitol Hill janitors and police would receive a pay cut because of the sequester.

In his Friday press conference, Obama claimed, "They're going to have less pay, the [Capitol Hill] janitors, the security guards. They just got a pay cut." Shortly after that, CNN's Bash obtained from the Senate Sergeant-at-Arms that the workers would not receive a pay cut, just a limit on overtime pay. NBC ignored the distortion on its weekend newscasts, while CBS and ABC reported it one time each. 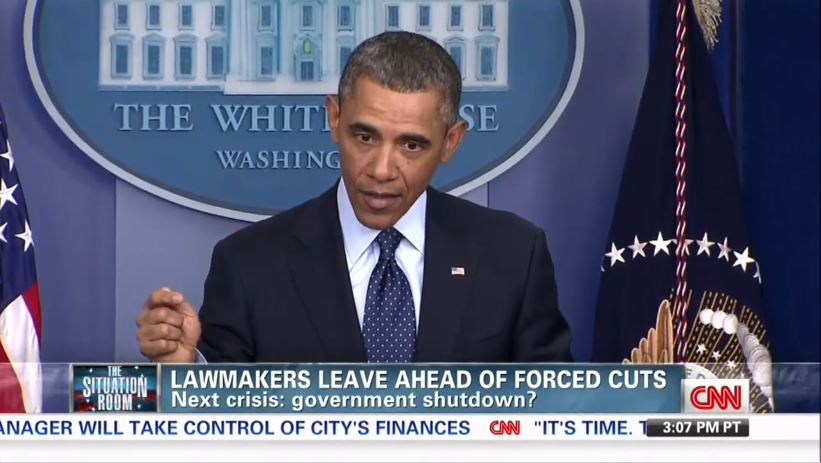 This Week host George Stephanopoulos brought up the claim about the sequester in a Sunday interview with White House economic adviser Gene Sperling:

"And at least twice this week the administration got caught exaggerating the impact. The President claimed the Capitol janitors are going to get a pay cut. The architect of the Capitol denied that. He said it was premature at best."

Meanwhile, CBS White House correspondent Major Garrett reported this on Saturday's CBS Evening News: "The White House has been accused by fact checkers of The Washington Post of exaggerating the speed and severity of education job losses and janitorial cuts on Capitol Hill."

Contrary to the networks' near-blackout of the matter, CNN was on the story from the beginning. Bash tweeted her fact-check shortly after the President's press conference and her report aired twice on Friday's The Situation Room. CNN made two other mentions of Obama's fiction, once on Saturday's 12 p.m. hour of Newsroom and then during the 8 a.m. hour of CNN Sunday Morning.

However, the three major networks reported the President's falsity twice over the entire weekend.