Her source, the Tax Policy Center, is the joint venture of two liberal think tanks, but since the American Enterprise Institute is a "conservative think tank" O'Brien threw water on the credibility of its support for Romney's tax plan. And she herself cited a TPC blog post attacking Romney's plan, but wouldn't accept a defense of the plan because it was a "blog post." 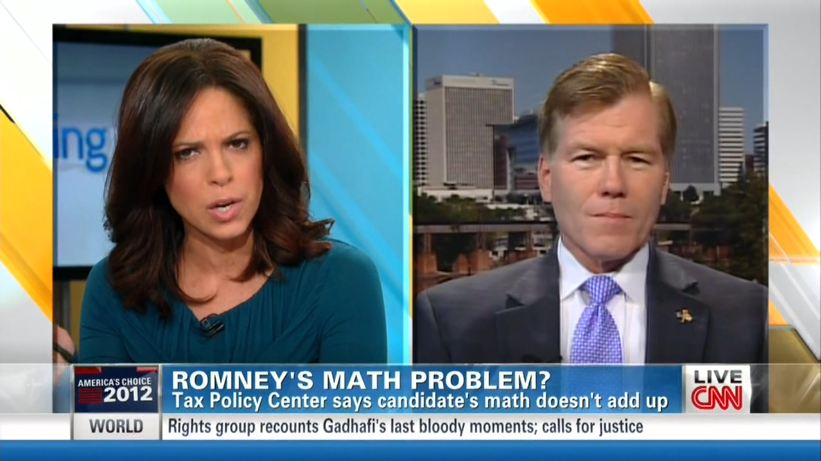 "So, they're basically saying the math doesn't work," O'Brien cited the TPC analysis. "Is this very damaging, because the details have been low at this point?" she asked Romney supporter Gov. Bob McDonnell (R-Va.).

McDonnell countered with "six studies" upholding the plan, which O'Brien dumped on. "[O]ne was a blog post, some of those are completely partisan. So, they've been debunked in a lot of ways."

One of the studies is from Princeton University and even Anderson Cooper couldn't bury that one the other night. "Princeton economist Harvey Rosen assumes the tax cuts would generate enough economic growth to offset the cost, but for many, that is – that's a rather large assumption. One that's also by the way questioned by many conservative economists as well," he lamely offered, while not disqualifying the source as partisan.

And O'Brien herself was sloppy with the facts. "So, pre-debate polling show that the President was up 15 points in the state of Virginia," she reported while the CNN headline read "Obama's Lead With Va. Women: Pre-debate poll: Obama up 15+."

"I'm not sure what you're looking at there, Soledad," McDonnell responded. "I can only tell you that five months ago, Mitt Romney was down eight points in Virginia. Today, almost all the polls have him up one, two or more points.

[UPDATE] Politico's Dylan Byers reported that an O'Brien spokeswoman admitted she erred and meant to say that Obama had a 15 point lead among women likely voters according to an October 4-9 Quinnipiac poll.

A transcript of the segment, which aired on Starting Point on October 18 at 8:16 a.m. EDT, is as follows:

SOLEDAD O'BRIEN: We heard in the debate Mitt Romney talking about his tax proposal. And he said this. I want to play that clip.

MITT ROMNEY, Republican presidential candidate: Every middle income tax payer no longer will pay any tax on interest, dividends or capital gains. No tax on your savings. That makes life a lot easier. If you're getting interest from a bank, if you're getting a statement from a mutual fund or any other kind of investments you have, you don't have to worry about filing taxes on that. Because there will be no taxes for anybody making $200,000 a year and less on your interest, dividends and capital gains.

O'BRIEN: The President, at the time of the debate, used the word sketchy to describe the governor's math. I want to play that chunk as well.

BARACK OBAMA, President of the United States: If somebody came to you, Governor, with a plan that said here, I want to spend $7 or $8 trillion and then we're going to pay for it, but we can't tell you until maybe after the election how we're going to do it, you wouldn't have taken such a sketchy deal. And neither should you, the American people. Because the math doesn't add up.

O'BRIEN: The President called it sketchy, and there's a new Tax Policy Center rated the Governor Romney's plan and they say this. "These new estimates suggest that Romney will need to do much more than capping itemized deductions to pay for the roughly $5 trillion in rate cuts and other tax benefits that he has proposed." So, they're basically saying the math doesn't work. Is this very damaging, because the details have been low at this point?

Gov. BOB MCDONNELL (R-Va.): No. There's six other studies, including one from Princeton and American Enterprise Institute and others that say that the Romney math does work. But the first question really is what's the President's plan to get us out of debt? He said four years, Soledad, and we've got 23 million people that can't work. We have higher taxes. We're six trillion more in debt and Americans have $4,000 less in take-home pay. I mean, I think we start with that and then ask what's the rationale for a second term of Barack Obama that's going to make us any more financially secure? Secondly, I think –

O'BRIEN: So you know the other six reports – let me just stop you there for one second if I can, governor, because you know -- and we've discussed this a lot, those other six reports, one was a blog post, some of those are completely partisan. So, they've been debunked in a lot of ways. I guess, my question would be, you don't think the Tax Policy Center is accurate when they say this is not going to work? This does not add up. That's what they say.

MCDONNELL: No. I'm saying if you look at credible reports from American Enterprise Institute and Princeton University, you've got a contrary view on that. So, there's studies, I think, on both sides. I'm saying that there's not a plan for Governor – for President Obama that he's laid out for the second four years that I think will produce any different results.

At least, Mitt Romney has a plan. And what he believes is that you don't get more revenue to solve the debt problem simply by raising taxes. That's the one plan that President Obama has laid out. He says that the way you do it is you have a tax code that encourages economic growth and job creation and you grow the economy that way. It really is a fundamental difference between two candidates on how you raise revenue and get us out of debt.

O'BRIEN: And as you well know, the American Enterprise Institute is a conservative think tank. So, having them support that is not exactly a surprise. Before I let you go, I want to ask you a quick question about Virginia. 2008, President Obama was the first Democrat to carry Virginia, I think, it was like in 40 some-odd years. Pre-date –

O'BRIEN: Forty-four years. So, pre-debate polling show that the President was up 15 points in the state of Virginia.

O'BRIEN: We don't really have good post-debate polling yet. And we're hoping to get that soon. How worried are you that your state is going to go for President Obama when the polls show a significant lead pre-debate after the first pretty awful debate?

MCDONNELL: I'm not sure what you're looking at there, Soledad. I can only tell you that five months ago, Mitt Romney was down eight points in Virginia. Today, almost all the polls have him up one, two or more points. And I think it had a lot to do with that first debate when people actually got to see Barack Obama and Mitt Romney side by side, overwhelmingly, and especially women decided this was a leader. This was a guy with real answers and real solutions that focused on results, not rhetoric, not blame like the President, but had a way to get us jobs and get us a energy plan, and get us out of debt and provide more incentives for entrepreneurs.

So, there's a lot of polls, Soledad, as you know. I think some are probably more reliable, but the trends are unmistakably going towards Mitt Romney. He was here yesterday, with Paul Ryan the day before. He'll be back in the near future. He's spending a lot of time in Virginia.