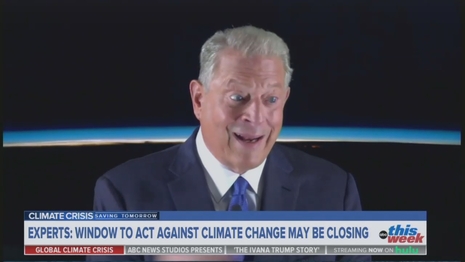 When it comes to global warmism, it's not easy to get to the left of Al Gore. But ABC's Jonathan Karl managed to pull off that dubious feat Sunday morning, with Gore as his guest on This Week

Karl began by giving Gore a glowing intro, claiming that his scaremongering An Inconvenient Truth movie is "credited with raising global awareness about the dangers of climate change and increasing extreme weather patterns."

Actually, An Inconvenient Truth, and Gore's campaign of climate scares, have been "credited" with being wrong on many of their claims.

Karl soon wondered why Biden has not yet declared a national "climate-change emergency," and put it to Gore whether it was time for Biden to do so. Perhaps not wanting to step on Ol' Joe's toes, Gore dodged the question, saying:

"I'll leave it to others to parse the pros and cons of what an emergency declaration would lead to."

A bit later, Karl fretted that Biden's moves to lower gas prices by begging the Saudis to increase production, and seeking to increase domestic production, are "counterproductive in terms of the climate agenda."

"We need to avoid confusing the short term with the long term, that's different from investing billions in new fossil fuel infrastructure and new oil and gas drilling."

Gore seemed to be giving Biden a pass on his current moves, just so long as he didn't do anything to permit production to be increased in the long term.

So, congrats Jonathan: full climate-virtue-signaling points for managing to be even more radical than Greta Thunberg's spirit godfather: Al Gore!

Note: Karl couldn't induce Gore to knock Biden for not being radical enough on the environment. But Gore did offer up some of his standard alarmist shtick. At one point, he declared that unless his global-economy-killing demands were obeyed, nothing less than "the survival of our civilization" would be threatened!

And check out Gore's facial expressions, which veered between frenzy, and the look of a man smelling something unpleasant in the studio.

And can any conservative see Al Gore and listen to his climate spiel without thinking of the late great Rush Limbaugh's Algore Countdown to Armageddon clock?

On This Week, ABC's Jonathan Karl prodding Al Gore from the left on "climate change" was sponsored in part by Hulu, Amazon, Dell, Intel, and Walmart.

AL GORE: Within less than 50 years it'll be here.

JONATHAN KARL: Former Vice President Al Gore discussing rising CO2 levels in his documentary, An Inconvenient Truth, which debuted over 16 years ago. The film was credited with raising global awareness about the dangers of climate change, and the years since have seen increasing extreme weather patterns.

AL GORE: If we don't stop using our atmosphere as an open sewer, and if we don't have stop these heat-trapping emissions, things are going to get a lot worse! More people will be killed, and the survival of our civilization is at stake.

KARL: This is much of what you talked about in, I mean, for years, but certainly in An Inconvenient Truth. And we've heard from President Biden. He's called climate change an emergency, he's called it a clear and present danger. But he has stopped short from declaring a national emergency. What, what is your sense? Is it time for the president to declare that climate change is a national emergency?

GORE: Well, Mother Nature has already declared it a global emergency. And, and I'll leave it to others to parse the pros and cons of what an emergency declaration would lead to.

KARL: But he's also facing a challenge here. Really, the front-line issue going into midterms is rising gas prices, part of it due to the war in Ukraine. And he's gone, he's encouraged the Saudis to, to, to produce more oil, he's talked about expanding domestic oil production, getting more offshore oil drilling in the United States.

I mean, you understand why he's doing this. They're, they're desperate to get gas prices down, but isn't this counterproductive in terms of the climate agenda?

GORE: Well, we need to avoid confusing the short term with the long term. That's different from investing billions in new fossil-fuel infrastructure and new oil and gas drilling that would not do anything to help the current crisis, or to help gasoline prices for that matter. But would guarantee increased emissions in the years ahead.