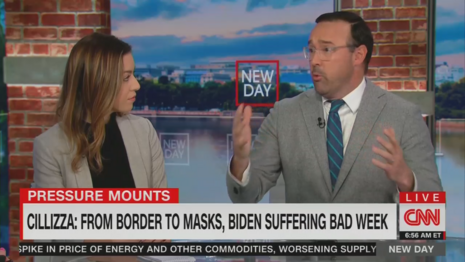 So it was an eye-opener this morning when, appearing on New Day, Cillizza  tagged Biden for going off-script on masks, contradicting his administration's official policy on the matter. COVID policy looks "directionless," and "the Biden administration looks listless right now."

As they discussed the impending repeal of Title 42, which would remove any coronavirus rationales for controlling the southern border, Cillizza said:

"You are seeing as close to a full-scale political revolt within a party of a president as you're going to see."

Looking ahead to the midterms, Cillizza concluded by saying, that the impending immigration surge on the border portends "nothing good for Democrats," adding to "what is already a really bad political climate for Democrats."

Co-host Brianna Keilar concurred, saying the Democrats "are worried. And rightly so."

Expect CNN to return to its regularly-scheduled programming of bashing Republicans and defending Democrats. But when it comes to the liberal media, conservatives must take their pleasures where they can. And this was one of those moments.

Note: there was an amusing moment in which Cillizza committed a crime against lib-speak, actually employing the term, "illegal immigration." Cillizza quickly corrected his faux pas, amending his remark to say, "undocumented immigrants." We'll let you off this time with a warning, Chris—but don't let it happen again!

CNN's Cillizza saying Democrats are in revolt against Biden was sponsored in part by Expedia and Tractor Supply.

BRIANNA KEILAR: As you say, Biden probably would like to forget the last few days.

CILLIZZA: Yeah. I mean, maybe the last few weeks! It's been a very difficult time for him. So, you are seeing as close to a full-scale political revolt within a party of a president as you're going to see, right? Every day—yesterday it was Steve Sisolak, the governor of Nevada, and Tim Ryan, Ohio congressman who's running for the Senate coming out and saying, well, this seems reckless and I wish they had a better plan and I'm not for this.

Every day, there's this drumbeat of, whether it's a senator, or someone running for office on the Democratic side, saying this is not going well.

And then throw into that the fact that, look, Biden, we know, this is not new, Biden tends to veer off message. He's done it repeatedly as it relates to Ukraine and Vladimir Putin: he should be removed, those sorts of things.

And he was asked in New Hampshire, on Tuesday, about the masking decision. And said, it's up, people should do what they feel. You know, it's up to them, I believe was his exact wording. Well, that's not the administration policy, particularly because that was a time when they were trying to sort out the CDC, and whether DOJ should appeal this federal court ruling.

KEILAR: Surge of migrants on the border. What does that mean for the midterm elections?

CILLIZZA: Nothing good for Democrats. In March, there was already a record number of people arrested at the border. You have immigration at a two-decade-high in terms of people saying illegal immigration, undocumented immigrants coming into the country, is a major problem that they're worried about. And that's before any of this.

I mean, let's be honest. The average person is not like, May 23rd. You know, they're not, they're not focused on this yet. But they will be if you see a surge at the border. So it adds to what is already a really bad political climate for Democrats.

KEILAR: And they're worried. And rightfully so.