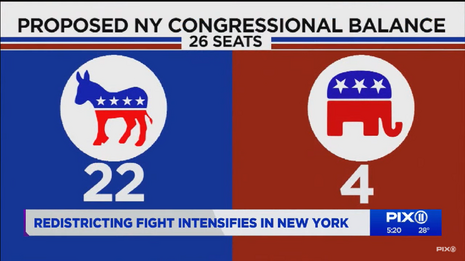 First let us take a short time trip to less than a year ago to April 6, 2021 when Cillizza was in the middle of throwing a political conniption fit in "Voters say *this* is the biggest election problem in the country."

Amid the ongoing fight over the recently passed Georgia election law -- and the subsequent decision by Major League Baseball to pull its All-Star Game out of Atlanta this summer -- you might reasonably conclude that efforts to restrict access to the ballot box would be the biggest election issue in the country.

Or if not voter disenfranchisement, then voter fraud -- particularly as former President Donald Trump continues to try to discredit the 2020 election despite zero actual evidence of fraud.

And you would be wrong! On both counts!

It's actually gerrymandering -- the drawing of outlandish legislative and congressional districts for purely political reasons -- that bugs people the most.

Of course this was back when it looked like redistricting (or what Cillizza branded as "gerrymandering") would be conducted as normally happens by state legislators.

However, in the meantime, the Democrats have gotten the courts (Pennsylvania and North Carolina) involved in what was normally a legislative process, and as a result, gerrymandering has undergone a miraculous transformation in which it is no longer called "gerrymandering" because it wildly favors the Democrats as Cillizza happily gloated over on Thursday in "How Democrats may actually pull off a *major* redistricting upset."

Conventional wisdom heading into this year was that Republicans would benefit mightily from the decennial congressional line-drawing process, carving up districts and creating a decidedly friendly national map.

But as states rush to finish their House maps in advance of the rapidly approaching 2022 primary season, a new storyline has emerged: Democrats could well break even or possibly gain an advantage when all of the new lines are finished across the country.

And as Cillizza gushes in delight at this turn of events, notice a certain ugly word completely absent from the story:

1) New York Democrats unveiled a congressional map that would take the current delegation of 19 Democrats and 8 Republicans and potentially turn it into a 22-4 split. (The state is losing a seat.) It is "the largest single-state shift in the country," according to Cook Political Report House editor David Wasserman.

2) Pennsylvania's Supreme Court, where Democrats hold a majority, took control of drawing the state's lines, after the Democratic governor and the Republican-controlled legislature deadlocked on a map that must reduce the state's House delegation from 18 seats to 17 seats.