The only people Kamala Harris has managed to bully lately have been members of her own staff.

But an MSNBC analyst tried this morning to paint Harris as a tough prosecutor who intimidated Russian dictator Vladimir Putin with her remarks in Poland earlier this week.

"Yet another piece of her lived experience that she really brings to this role as Vice President in this moment of crisis, and that is her role as prosecutor, right? This is somebody who is used to kind of taking on bad guys for a living. And so, her really putting her finger in the chest of Vladimir Putin and saying that there will be consequences."

Fellow panelist Nola Haynes, a Pepperdine prof, gave a mixed take on Harris's performance. On the one hand, she described Harris as "strong" and "assertive," and as having delivered the right message to Putin. But on the other hand, when Cross asked whether Putin had received that message, Haynes said:

"I’m going to be blunt here. Putin is a sexist so probably not. On top of that, there’s the race component. So taken together, the intersectionality of her race and gender, he probably dismissed what she had to say."

Cross herself revealed a big chip that she is apparently carrying on her shoulder, saying:

"The three ladies [Cross and her two guests] you see on this screen are familiar with being underestimated by our counterparts a time or two." 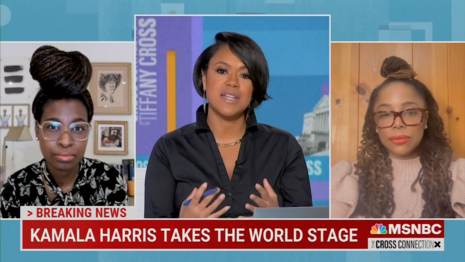 When it came to Harris's European trip, the panel predictably never uttered a word about Harris's laughing response when questioned about the refugee crisis. Kamala's cackling angered many in Ukraine, including President Zelensky's former spokeswoman, who tweeted that it would be a "tragedy" if Harris ever became president.

And naturally, the segment was a festival of woke-speak. Errin Haines spoke of "lived experience" three times, and Nola Haynes worked in "intersectionality."

On Tiffany Cross's MSNBC show, MSNBC analyst Errin Haines describing Kamala Harris, with her remarks in Europe, as having poked her finger in Putin's chest, was sponsored in part by Google, Volvo, Sling, Panera, Dove, and GlaxoSmithKline, maker of Parodontax.

TIFFANY CROSS: Nola, I want to bring you into the conversation because you’re an expert on the politics of the eastern bloc. Do you think the Vice President delivered the right message on that stage? Not just to our NATO allies, but to our enemies as well?

NOLA HAYNES: I think so. Going back and looking at the transcript between her and the Polish president, I think that the commitments were very clear. I think she was strong. She was assertive. And let’s not forget. This is woman in the Senate who had senators shook, you know? Who had Bill Barr shook. Like, this woman is very capable, and reading some of these think pieces kind of infantilize her in a way, saying, is she up for it? Can she do it? Of course she’s up for it. Of course she can do it.

CROSS:And I think the three ladies you see on this screen are definitley familiar with being underestimated by our counterparts a time or two. So certainly, I think it was great for people to see her on the world stage at this point.

Errin, you and I spoke a little bit about this. It’s not lost on me that she spoke in Poland, as some on the border of Poland were not welcoming to people of African and South-Asian descent. The Vice President herself is of African and South-Asian descent. She didn’t address this in her remarks. And we don't know if she addressed it privately or not. But I’m just curious, your thoughts on the irony of that situation. To see her where, you know, there is documented evidence of rampant white supremacy in Poland. Curious your opinion there.

HAINES: Well, sure. Racism certainly does not take a break during times of conflict. I mean, if anything, it is absolutely present during those times.

I want to go back to one point that Nola was making that I think is really important to point out in this moment. And that is yet another piece of her lived experience that she really brings to this role as Vice President in this moment of crisis, and that is her role as prosecutor, right?

This is somebody who is used to kind of taking on bad guys for a living. And so, her really putting her finger in the chest of Vladimir Putin and saying that there will be consequences.

With her lived experience as a, you know, her South-Asian heritage and her black heritage, you know, we don’t know what conversations may have been had that we are not privy to around this issue, but certainly, she is somebody who is always thinking about who is not in the room, who is not at the table and who may be affected in any given situation is what I’m told by aides and people who know her leadership style.

And so, the thought that maybe she has brought some of that lived experience to bear in raising those kind of issues, even if it was in a private setting, I would certainly be curious to know that as well.

CROSS: But do you think that that message was well received by Putin himself?

HAYNES: Well, you know, I’m going to be blunt here. You know, Putin is a sexist, so probably not. And on top of that, you know, there’s the race component. So taken together, the intersectionality of her race and her gender, he probably dismissed what she had to say.