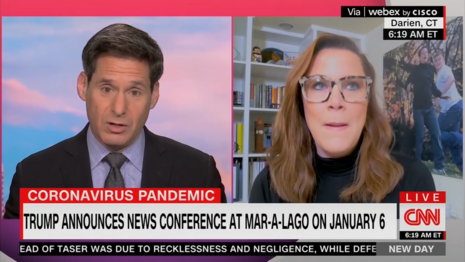 Christmas is coming, but congressional Republicans won't be seeing Jesus—not if you believe S.E. Cupp, that is.

Responding to co-host John Berman's question as to whether congressional Republicans would continue to support Trump, Cupp said:

"I have long given up on the sort of the pivot that Republicans will see Jesus, and understand just how dangerous and awful these years of rhetoric and also policy have been....I have long since lost the idea that they'll find religion."

This is a downright weird take for Cupp, a self-proclaimed atheist who in 2010 literally wrote a book titled Losing Our Religion: The Liberal Media's Attack on Christianity. Oh look, she's now a part of the problem she wrote about back then. She mocks the Republicans for being far away from their professed personal savior.

MRC founder Brent Bozell even wrote a blurb for Cupp's book. He wrote: "How vicious is the secular media's all-out assault on the Judeo-Christian underpinnings of America? it is ugly enough, and dishonest enough that a professed atheist has risen to Christianity's defense." All good things come to an end.

We get that Cupp detests Trump-the-man. But didn't she used to style herself as some sort of conservative? Even Trump's policies were awful, even dangerous.

So Trump's policies were awful, too? Cupp didn't like Trump tightening the border? Cutting taxes? Appointing constitutionalists to the Supreme Court? Since Cupp hates not just Trump's personality but also his policies, what distinguishes her from CNN's stable of cookie-cutter lefty talking heads? Looks like there's no nuance left in Cupp's down-the-line liberalism.

JOHN BERMAN: We also learned from Donald Trump that he's going to hold a news conference at Mar-a-Lago on January 6th, the one-year anniversary of the insurrection. What do you see here, S.E.?

And the idea that he would hold any kind of propaganda event . . . and where he potentially stokes more violence and encourages, either tacitly or explicitly people to try again, well, it makes me nauseous, it makes me sad, and very nervous and afraid.

BERMAN: It also, I think, will be very interesting to see how Republicans in Congress respond to that. I mean, these are people who have largely followed him over the last year. Are they going to sing his praises on that day?

CUPP: Undoubtedly. I have no doubt. John, I have long given up on the sort of the pivot that Republicans will see Jesus, and understand just how dangerous and awful these years of rhetoric and also policy have been, not just for Republicans who lost everything, but for America. I have long since lost the idea that they'll find religion. I think, going into a midterm, they are all in for Trump.