Yeah, that's the problem: the liberal media has gone too easy on Kyle Rittenhouse!

Incredibly, former Obama appointee Brittany Packnett Cunningham claimed exactly that during Tiffany Cross's MSNBC show on Saturday, where Cunningham's a frequent guest. Of all outlets, Cunningham amazingly singled out the New York Times as being too soft on Rittenhouse. Right: that dastardly, conservative-controlled, Gray Lady!

Cunningham also claimed that there were "only so many acceptable losses" in the minds of white supremacists, and since Derek Chauvin was sent to prison, extra efforts were being made to defend Rittenhouse and the defendants in the Ahmaud Arbery trial.

Cunningham said that "white men control these systems, and the rest of us should be living in fear." The "rest of us?" Ya mean, the three white men who threatened and attacked Rittenhouse? Admirable interracial solidarity there, Brittany!

Cunningham also took a gratuitous ad hominem shot at Sean Hannity, saying, "we have to be smarter than Sean Hannity. Which is not hard to do, frankly." And she managed to work in an accusation that white men "stole [America] from indigenous folk, and built [it] with black people’s labor."

Cross piled on, saying she had "zero sympathy" for Rittenhouse.

One thing that was entirely absent from the segment: any serious examination of the facts of the case, Rittenhouse's assertion of self-defense, one of the witnesses admitted they were shot only after they pointed a gun at Rittenhouse, and testimonies to how one of the people killed made threats to kill people protecting property. Instead, Cunningham simply blamed the situation on the "whiteness of it all." 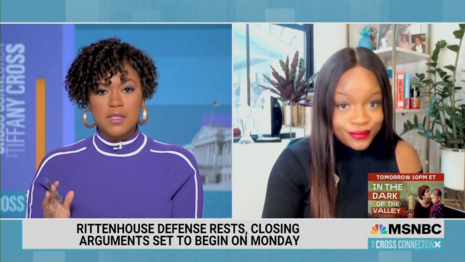 Regular MSNBC guest Brittany Packnett Cunningham claiming the MSM has been going too easy on Kyle Rittenhouse was sponsored in part by Intel, Dell, Abbott, Procter & Gamble, maker of Downy, and Coca-Cola.

BRITTANY PACKNETT CUNNINGHAM: There are only so many acceptable losses that white supremacy is willing to accept. So if Derek Chauvin is going to jail, you had best believe that Ahmaud Arbery's murders, and people like Kyle Rittenhouse, are going to be defended with all that this culture has.

Because they have to make sure that the message is sent that white men will continue to control these systems, and that the rest of us should be living in fear.

Look, we have to be smarter than Sean Hannity, which is not hard to do, frankly.

In the court of public opinion, they’re really arguing that white men, especially white men with a gun, are allowed, and have the space, to defend and protect a country and a social order that keeps them at the top, and a country that they stole from indigenous folk, and built with black people’s labor.

TIFFANY CROSS: I feel zero sympathy for this young man who killed these two people.

CUNNINGHAM: Frankly, when I look at mainstream media accounts, that fall for Kyle Rittenhouse’s tears, and that display him like some kind of confused teen, or talk about him injuring and murdering people with a gun in the passive voice, they are participating and perpetuating in that same culture of violence.

So no, New York Times, he did not end up fatally wounding a man, he actively and voluntarily shot and killed him (...)  The media is participating and perpetuating this charade. As far as I can tell, the only reason why any of this is allowed, is because of the whiteness of it all.