In the Biden White House, reporters aren't there to expose the president, but to clean up his rhetorical messes.

Take Monday's Morning Joe. Biden had put his foot in it by responding to a question by CNN's Kaitlan Collins that he thought the Department of Justice should prosecute people like Steve Bannon who refuse to testify before the January 6th special committee.

Sure sounds like Biden was attempting to interfere in the fair and impartial administration of justice. But no!

First Joe Scarborough and then Jonathan Lemire [who somehow doubles as a supposedly objective AP "reporter" when he's not spouting liberal opinions as an MSNBC analyst] rushed to Biden's defense. Lemire adamantly claimed that he was there in the press gaggle with Collins, and he can clean this up:

"Let’s be clear, here. This is him uttering his opinion. This is very different than what Donald Trump used to do when he was in office."

Really? Yes, the DOJ put out a statement declaring that it would make judgments independently. But Biden's bell can't be unrung. Can anyone imagine that some of those ambitious DOJ attorneys won't bear in mind what the "Big Guy" wants? And it was particularly precious that Lemire prefaced his defense of Biden by announcing, "let's be clear here." Sounded like the president was sending a clear message that "justice" and prosecuting the Trump advisers was the same thing. 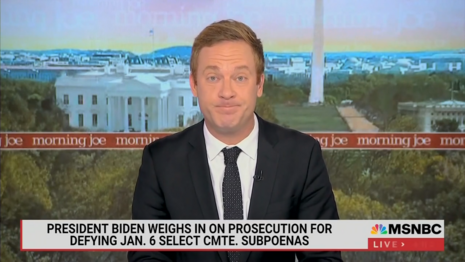 Lemire then veered from the absurd to the downright comical. In discussing Biden's decision not to honor Trump's claim of executive privilege regarding January 6th-related communications, Lemire said:

"January 6th is something this White House cares deeply about. That’s why they would not let President Trump use executive privilege to help his allies."

C'mon man! Lemire knows that it's lame to suggest that Biden is for prosecuting Trump out of the goodness of his heart, and that somehow refusing Trump's  executive privilege claim couldn't be seen as a nakedly partisan desire to expose and harm Trump, and Republicans in general.

And speaking of naked partisanship, Lemire got off another side-splitter, claiming that the members of the select committee "want the investigation to be thorough and fair." Right. Because nothing says fairness like committee members such as Adam Schiff.

One last Lemire blunder: in claiming that Biden has set a new tone at the Justice Department, Lemire compared it with "the way Jeff Sessions and Bill Barr ran the place." Jeff Sessions, the Attorney General forced out by President Trump for being too independent in appointing Robert Mueller to investigate the supposed Russian connection?

Like a good liberal, Merrick Garland's DOJ is suing states over voting-integrity laws, immigration control, and abortion restrictions. At every turn, he's pleasing the Democrats, and their media partners.

Morning Joe covering for Biden on his interference with the Justice Department was sponsored by BMW, Amazon, GoDaddy, and Sleep Number.

President Biden weighed in on Friday on whether the Justice Department should prosecute those who defy such subpoenas.

REPORTER: What’s your message to people who defy congressional subpoenas on the January 6th committee?

JOE BIDEN: I hope that the committee goes after them and holds them accountable.

REPORTER: Should they be prosecuted by the Justice Department?

MIKA: The DOJ responded with a statement that underscores it wall of separation from the White House, saying, the Department of Justice will make its own, independent, decisions in all prosecutions, based solely on the facts, and the law. Period. Full stop.

JOE SCARBOROUGH: Jonathan Lemire, the vice, uh, the president came out and was making, it seemed, was making recommendations or at least giving his opinion to what the Justice Department should do. We saw very quickly the difference in the Justice Departments now and under Donald Trump. They came out immediately and said, fine, have your own opinions. We're going to make the decision on our own.

JONATHAN LEMIRE: Yeah, that's right. I was among those reporters on the South Lawn of the White House when the president said that. It was a little surprising.

But let’s be clear, here. This is him uttering his opinion. This is very different than what Donald Trump used to when he was in office, which he tried to use the Department of Justice as his personal lawyer, lawyer firm, and going after his political opponents.

So, the DOJ wanted to make that clear, and the White House has said so over the weekend as well. That they want—there's a bright line here, the say, between the West Wing and main Justice and they’re not going to interfere.

And that’s been the tone from this administration from the start. That they felt like President Biden has said, that one of the more damaging legacies from the Trump administration was the fact that Americans lost faith in institutions, with the Department of Justice right near the top, with the way Jeff Sessions and Bill Barr ran the place. And that he wants to make sure they're independent and they will have no interference. And that has been their tone throughout this process.

That said, January 6th is something this White House obviously cares very deeply about. That’s why they would not let former President Trump use executive privilege to help his allies who have been called before the select committee in the House. And he himself, Trump, may face the same fate. There are deliberations right now happening in the committee.

And they feel this is something, they want the investigation to be thorough and fair. Not just to bring those to justice, but, of course, to send some sort of message that behavior like this won’t be tolerated again with more elections on the horizon and real fears about whether Republicans will certify the results if they don’t like them.