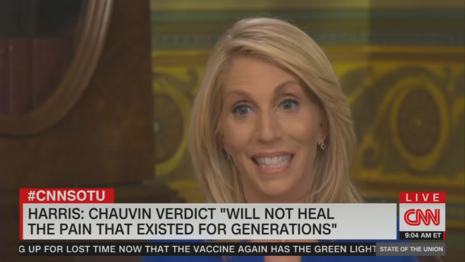 If Sarah Palin had been elected Vice President in 2008, no one can imagine CNN's Dana Bash gushing about her Moment in History. But on Sunday's State of the Union, Bash's interview was shamelessly soft.

The first question out of the mouth of any self-respecting journalist given the chance for a one-on-one with Harris would have been along these lines:

"It's been a month since President Biden put you in charge of the situation at the US-Mexican border. Yet you still have not visited the border. Why not, and can you give us a firm date when you will visit?"

But Bash didn't even raise the issue of "immigration" until the second segment of the lengthy interview. And when she did, she never asked Harris anything about her failure to visit the border! And of course, she never referred to the situation as a "crisis."

Before beginning the interview, Bash framed it as a chance to glorify Harris and her Historic Moment:

"I spoke exclusively with Vice-president Kamala Harris about her-history making role, the weight of the responsibility that brings, and how and when president Biden seeks her advice."

Most of what passed for "questions" by Bash were, for the most part, simply Bash's affirmations of whatever Harris wanted to say.

This is really a moment in America. Racial tensions as you just mentioned, they are really palpable. Your experience, your life experience is different from every one of your predecessors. How is that bringing itself to bear right here in the White House?"

When it came to the border, Bash framed Harris's responsibilities in the most Kamala-friendly way. Rather than saying that Biden put her in charge of the border crisis, Bash said Biden "tasked you with leading diplomatic efforts to work with Mexico and the Northern Triangle countries." Far, far away from those disturbing photos of kids crammed into border facilities!

And far from discussing the failure of the Biden administration, Bash only wanted to know how Harris would "define success" in the role to which Biden appointed her 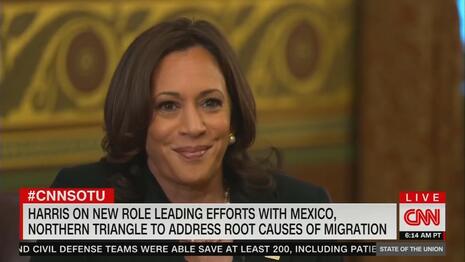 And in that key failure of the interview, Bash didn't ask why Harris hasn't visited the border, or whether Harris could set a firm date for her first visit. Instead, Bash only asked if Harris would visit Central America and Mexico. Harris didn't even give a firm answer on that, blaming "Covid issues."

When Harris blamed problems at the border on the Trump administration having supposedly halted nation-building efforts in Central America, Bash helpfully stated, "you're rebuilding it."

When it came to Afghanistan, Bash didn't ask whether Biden's decision to withdraw all US troops would, as others have said, lead to a human rights disaster and permit Al Qaeda and ISIS to use the country to launch terrorist attacks. Instead, Bash wondered whether Harris was "the last person in the room" when the decision was made. Harris assured Bash that she was.

It's hard to get to the left of Biden-Harris, but Bash's toughest push was on gun control: "There have been at least 50 mass shootings in America in a little over a month. Your administration has made clear that infrastructure is the next big legislative priority. Why not guns? Anthony Fauci told me over the weekend that gun violence is a public health emergency."

In addition to failing to ask Harris about her failure to visit the border, Bash also didn't take the opportunity to ask about other pressing issues, such as how Biden's massive tax-increase proposals would hurt the economy. Or how the US would respond if China invaded Taiwan, or if Russian opposition leader Alexei Navalny died in prison.

Bash's last "question" was this piece of downy-soft fluff:

"Tell me something that has surprised you that you never thought you would see, hear or feel personally as the Vice-president of the United States."

Harris boasted that the Biden administration would "lift half of America's children out of poverty," telling Bash, "that's good stuff! That's really good stuff." And on that happy note, the love-in concluded.

CNN's soft, warm, embrace of Harris and the Biden administration should have been sponsored by the DNC. Instead, it was sponsored in part by Skechers, Tractor Supply, and Google.

DANA BASH: As the nation waited to hear from the Chauvin jury, I spoke exclusively with Vice-president Kamala Harris about her history-making role, the weight of the responsibility that brings, and how and when President Biden seeks her advice.

KAMALA HARRIS: [Smiles] 9 minutes and 29 seconds, right? We all watched that video.

BASH: This is really a moment in America.

BASH: Racial tensions, as you just mentioned, they are really palpable. Your experience, your life experience is different from every one of your predecessors. How is that bringing itself to bear right here in the White House?

BASH: Let me ask about immigration.

BASH: President Biden tasked you with leading diplomatic efforts to work with Mexico and the Northern Triangle countries.

BASH: To address the root causes of migration. How do you define success in this role?

HARRIS: Yeah, that's a great question. Well, let's first talk about what it is.

The kind of work that has to happen is the diplomatic work that we have been engaged in including my calls to the President of Mexico, the President of Guatemala, and we have a plan to actually have another meeting coming up soon.

BASH: Are you going to go there?

HARRIS: Yes, we're working on the plan to get there. We have to deal with Covid issues. But I can't get there soon enough in terms of personally getting there.

Part of the problem is that under the previous administration, they pulled out, essentially, a lot of what had been the continuum of work, and it essentially came to a standstill.

BASH: You're rebuilding it.

HARRIS: We have to rebuild it!

BASH: President Biden always said that he wants you to be the last person in the room, particularly for big decisions, just as he was for President Obama.

BASH: He just made a really big decision: Afghanistan.

BASH: Were you the last person in the room?

BASH: And you feel comfortable?

BASH: We're almost at a hundred days. Tell me something that has surprised you that you never thought you would see, hear, or feel personally as the Vice-president of the United States.

HARRIS: We are going to lift half of America's children out of poverty, Dana. How about that? How about that? Think about that. I can't tell you [chuckles], maybe it's obvious, how much that means. What that will mean. That's good stuff! That's really good stuff.

BASH: Thank you for your time. I appreciate it.