Criticizing it as based on "calendars, not conditions," Richard Haass, in his ever-polite fashion, has ripped President Biden's decision to withdraw all US troops from Afghanistan by the 20th anniversary of 9/11.

On today's Morning Joe, Haass, the show's foreign policy maven and president of the Council on Foreign Relations, predicted with "near certainty" a "human rights tragedy" in Afghanistan as a result of Biden's decision. Haass also ominously foresaw that Afghanistan would once again become a base of operations for terrorist groups like Al Qaeda and ISIS.

This didn't entirely sit well with the Morning Joe crew as co-host Willie Geist demanded Haass defend his position: “I think a lot of people watching right now would say, 'My gosh, we’ve been there for 20 years. President Biden is right. It’s time to go home.' Explain why you’re disappointed.” 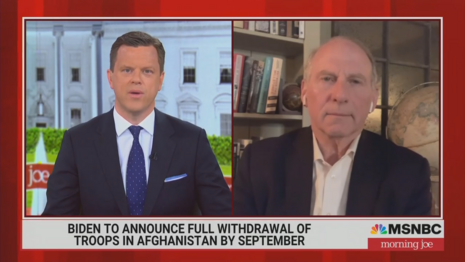 In addition to the likelihood of a human rights tragedy and the re-establishment in Afghanistan of terrorist groups, Haass also warned that the withdrawal:

Pulling all troops by the 20th anniversary of 9/11 is a PR stunt. And one that could tragically backfire if and when a terrorist operation is conducted by a group that re-established itself in Afghanistan after Biden's troop withdrawal.

Morning Joe foreign policy maven Richard Haass criticizing President Biden's decision to withdraw all US troops from Afghanistan by the 20th anniversary of 9/11 was sponsored in part by Dove, Lincoln, Legal Zoom, and Liberty Mutual.

Let’s dig into this decision with the president of the Council on Foreign Relations, author of the book, “The World: A Brief Introduction,” Richard Haass. Richard, good morning. It’s good to see you. Yesterday you called this decision, quote, disappointing. You said these kind of decisions should not be based on a calendar but should be based on the conditions on the ground in Afghanistan.

I think a lot of people watching right now would say, my gosh, we’ve been there for 20 years. President Biden is right. It’s time to go home. Explain why you’re disappointed.

RICHARD HAASS: Well, I think there’s the risk that Afghanistan again emerges as an important venue where terrorists operate. And I think there’s the near certainty that it will be a human rights tragedy. That anyone who worked with the United States will find himself or herself vulnerable to the Taliban.

I do think this also raises questions about America’s willingness to stand by our friends and allies.

This is a decision, which the president made, again, based more on calendars than conditions.

The danger is we pull out now, the government does fall, which I think sooner or later is more likely than not, or loses control over most of the country, what then? Near term looks very ugly. And does anyone really trust the Taliban to police the country so groups like ISIS and Al Qaeda don’t set up shop again?