Look for Dana Bash in an upcoming Downy commercial. Or maybe My Pillow guy Mike Lindell, in a bit of bipartisanship, might hire Bash as a celebrity endorser. Because the CNN host definitely is an expert when it comes to the soft and fluffy stuff—at least when she's interviewing Democrats.

Witness Bash's super-cushy, sentimental, suck-up journey with Kamala Harris today to Howard University, her alma mater. Well, it's not a big journey, about three miles from the CNN bureau in DC.  Guest-hosting on CNN's State of the Union, Bash gave Kamala one of those servile feminist-sisterhood Pelosi blowouts. 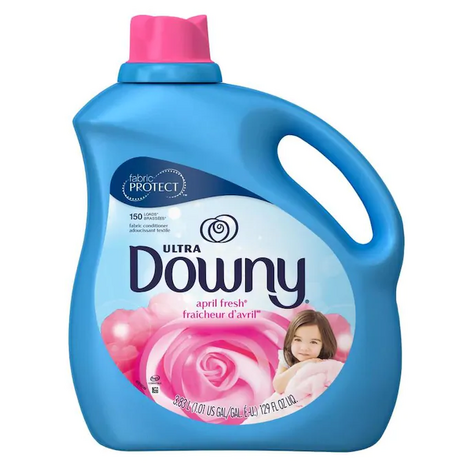 Note that when Bash mentions that Harris ran for and won a student body position as a freshman, and begins to ask if she ever had in the back of her mind, Harris cuts her off, claiming "I never had in my mind that I would run for public office."

Yup: no overweening ambition in Kamala!

Can't wait for Bash's similarly sentimental walk with Mike Pence around the campus of his alma mater, Hanover College, in the Hoosier State—but don't hold your breath! Last time around, left-wing sites touted "Dana Bash laughs in Mike Pence's face" and later, she harangued Pence on the Brett Kavanaugh nomination.

Maybe it's a woman-on-the-ticket thing. No? In 2008, Bash was harping on how Sarah Palin was "tightly scripted" -- and she got picked apart by Lou Dobbs for it. Bash was happy to insist Palin was a drag on the McCain ticket. 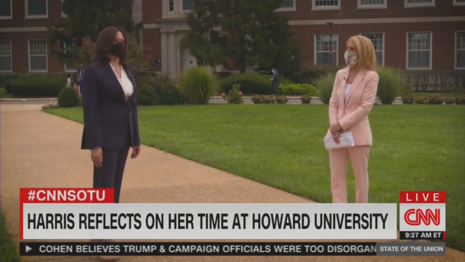 KAMALA HARRIS: Coming back, to do this interview here, and if all the students are here. But it's really, it's a very special place.

DANA BASH: You have fond memories obviously. How did this place shape you?

HARRIS: My first office that I ever ran for, first office was freshman class representative of the liberal arts student council.

BASH: And you won, of course.

BASH: And when you were running then, did you just think I want to be a leader on campus, or did you have in the back of your mind --

HARRIS: I never had in my mind that I would run for public office . . .

BASH: So I have a quote here from your book where you talk about Howard, the beauty of Howard. Every signal told students that we could be anything, that we were young, gifted and black and we shouldn’t let anything get in the way of our success.

BASH: So what did that mean for you, particularly as a black woman?

BASH: What did AKA [Alpha Kappa Alpha, Harris' historically African-American sorority] mean to you, and what did it do for you? And it had 1908 on the tree there, and that's when it was founded.

BASH: I think it’s really fascinating that you are — I know you don’t call yourself a step-mom. You call yourself--they call you Mamala. But still, you came into their lives midstream, at a really critical time.

HARRIS: They were teenagers.

BASH: That must have been very hard.

HARRIS: One of the keys to my relationship with Cole and Ella is their mom.

BASH: You guys are good friends.

HARRIS: We are friends. We have a very modern family.

BASH: And that kind of happened naturally?

BASH: And on that, I got to ask about your husband Doug. He, if you win, will be the first Second Man.

BASH: How does he feel about that?

HARRIS: Doug is just — he is, he has the best sense of humor. He is so incredibly supportive.

BASH: It takes a certain kind of man to feel comfortable in the shadow of a woman.

HARRIS: But you know, I don't, he and I, we don’t think of it as shadow. We are partners.

HARRIS: I get that. And we’re also challenging each one of us as we move forward, we’re challenging notions of gender and who does what and what that looks like. Right?

BASH: And he’s obviously comfortable with that.

HARRIS: Yeah. He’s so comfortable in his skin. Yeah. And that matters.

BASH: What would your mom say about where you are right now?

HARRIS: I think she’d be really, extremely proud, and she would say beat Trump! [extended laughter.]