Here are the highlights:

Scarborough offered no evidence in support of his assertion that black or Muslim rioters would have been shot. During months of post-George Floyd violence, arson, and looting, how many rioters were "shot in the face" or "sniped" by police?

Note: Morning Joe opened with a passage from Johnny Cash's rendition of "Hurt," a personal favorite of this NewsBuster, and surely one of the saddest songs ever.

Joe Scarborough on Morning Joe calling for the jailing of President Trump, Rudy Giuliani and Donald Trump Jr., and for an investigation of the Capitol Hill police for abetting the invasion of the Capitol, was sponsored in part by Volvo and Sleep Number. 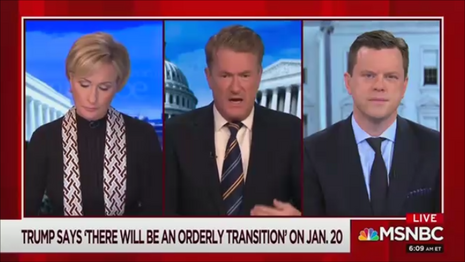 But I just — I do wonder this morning: why they weren’t better prepared for this?

Yesterday we saw some of these same Capitol Hill police officers who — by the way, I never complained when they were tough. I want them to be tough. I want them to protect [screams] the people’s House. Yesterday we see them patting terrorists on the back. We see them taking selfies. With people who were committing an insurrection against the United States of America. Politely opening the door for terrorists who had scrawled on the door "murder the media", who had broken through this glass. Letting them just walk through. Letting these Trump supporters walk through freely and politely opening doors. To the insurrectionists. And then letting the terrorists walk out of the same Capitol they had laid siege to, and threatened the lives of members of the Hhouse and members of the Senate who they said they were coming to get, including Mike Pence. There has to be an investigation. How many of these Capitol Hill cops are members of Donald Trump’s cult? How many?

MIKA BRZEZINSKI: Or was it okay because they are white? I just have to ask.

MIKA: Because what would have happened with Black Lives Matter protesters.

So I want to know from the Capitol Hill police, what is it, is it just white people, or is it Donald Trump supporters? Why do you scream at people walking across the street three blocks away from the Capitol? Why are you not as badasses around the Capitol, but then Trump supporters come in and you open the [full, unbleeped, word] f'ing doors for them?! [Screams] You open the doors for them! And let them breach the people’s House. What is wrong with you?

I also want to know are we a nation of laws? Are we a nation of one man? Donald J. Trump called for the insurrection against the United States of America! He called for it. Rudy Giuliani called for "combat justice," just an hour or two before this happened. Donald Trump Jr. said [pounds fist on table], "we are coming for you!"

That’s insurrection against the United States of America. And if Donald Trump Jr., Rudy Giuliani, and Donald Trump are not arrested today for insurrection and taken to jail and booked, and if the Capitol Hill police do not go through every video and look at the face of every person that invaded our Capitol, and if they are not arrested and brought to justice today, then we are no longer a nation of laws.