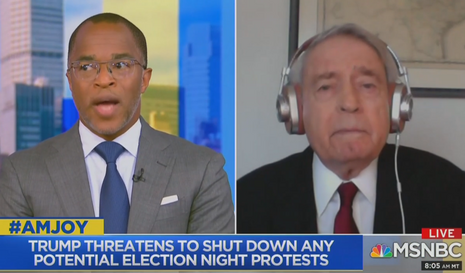 The mood was panicky on MSNBC's AM Joy this morning when guest host Jonathan Capehart brought on disgraced ex-CBS anchor Dan Rather to discuss the election. To Capehart's delight, Rather began by casting the election as a choice between racism and freedom!

"AM Jon" Capehart repeatedly expressed his "big fear" that white supremacy, i.e., President Trump, will win. He asked his guest if he was being pessimistic or realistic, and Rather said "very realistic."

Rather managed to work in one of his homespun expressions, saying that anyone who believes that President Trump downplayed the threat of coronavirus to avoid panic "will believe that rocks grow." But Rather's good ol' boy mask fell away when he exposed the contempt he, like many members of the liberal media, has for millions of Americans. Said Rather: "we're going to find out how many people are dumb enough to believe that."

Talk then turned to the allegation by a Department of Homeland Security "whistleblower" that he was pressured to downplay facts that President Trump might find objectionable, including the threat posed by white supremacists.

At least ten times, Rather described that situation as "dangerous," with Capehart chipping in twice with the same D-word.

The irony was lost on Capehart and Rather when Rather accused President Trump of basing his campaign on a "lie." Rather, of course, infamously attempted to defeat George W. Bush in 2004 on the basis of the lie of patently forged documents.

Note: listening to Rather repeatedly slur his words makes one suspect he's been taking elocution lessons from Joe Biden.

MSNBC's segment with "Dangerous" Dan Rather was sponsored by Discover, Fidelity, Procter & Gamble, maker of Cascade, and Safelite.

DAN RATHER: What this presidential election is about is whether the country's going to move more in the direction of white supremacy, or whether it's going to move more in the direction of a multiracial, constitutional republic based on the principles of freedom and democracy . . . His whole campaign is based on panic, but then he's asking us to believe that when it came to the coronavirus, he just didn't want to spread panic. Anybody who believes this will believe that rocks grow, and we're going to find out how many people are dumb enough to believe that. It's an excuse, and it's a lie. It's outrageous and it's very dangerous.

JONATHAN CAPEHART: Dan, I am so glad that you said what you said at the beginning of your answer: that this election is really a choice between American democracy and white supremacy. That is the way--I wrote a column about that. This is the way I've been viewing -- viewing this election . . . My big fear . . . my big fear is that white supremacy will win. Am I being overly, am I being pessimistic, or am I being realistic?

RATHER: No, I think you're being very realistic.

CAPEHART: This is an election that is a choice between American democracy, and white supremacy and I just said to Dan that I think my -- I'm afraid that white supremacy is going to win.

The claim is that the Department [of Homeland Security] is downplaying the role of white supremacists, and also downplaying the threats to the national election. How dangerous is it that we have federal departments that are -- you know, actively manipulating intelligence, but also manipulating information that is meant for the American people?