Even CNN Not Sold on Pelosi's Salon Trip, But Complains It's a 'Partisan Issue'

Bad news for Nancy Pelosi. Even CNN is not totally sold on her excuses for violating San Francisco's coronavirus lockdown rules by having her hair done indoors at a salon, and at least at times without a mask.

Discussing the matter on Thursday morning's New Day, co-host Alisyn Camerota wouldn't accept Pelosi's suggestion that she couldn't wear a mask while having her hair washed. Speaking to her own experience, Camerota said:

Co-host John Berman was of various minds. On the one hand, he said that Pelosi "should know better." On the other, he seemed to complain that "people are making this a partisan issue." But he then turned around and said that the real issue is that "too many people are trying to find an exception, or a cheat, or to get around the rules here."

Let's consider Berman's analysis. When Nancy Pelosi, the most powerful elected Democrat in America, she who lectured that "no one is above the law, even the President," violates coronavirus rules it is a big issue. She became one of those people who, in Berman's words, "are trying to find an exception, or a cheat." 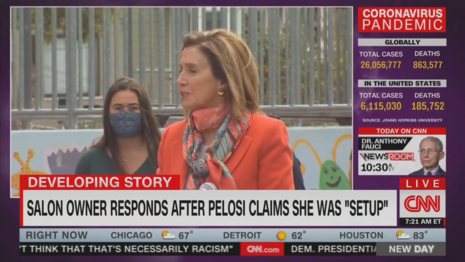 The liberal media loves to celebrate Pelosi as the savviest politician around. What does it say of her supposed savvy if, according to Pelosi, she "fell" for an alleged "set-up" by the salon people?

Also, it's not a good look for plutocrat Pelosi—net worth north of $100 million—a supposed champion of the working class, to be blaming working people for her breaking of the rules!

ALISYN CAMEROTA: Now to this developing story. House Speaker Nancy Pelosi claims she’s the victim of a set-up. She says she made a questionable decision this week by going inside a beauty parlor in San Francisco. That’s against the rules there. She’s also not wearing a mask in this portion of the video that was released by the salon. The salon’s owner’s staff insists she did wear one, just not at the moment that her hair was being washed. Pelosi blames the salon owner for releasing this video.

CAMEROTA: Well, the salon’s owner was quick to respond on Fox last night.

ERICA KIOUS: She had called the stylist, or her assistant did, and made the appointment. So, the appointment was already booked. If she’s in there comfortably, without a mask and feeling safe, then why are we shut down?

JOHN BERMAN: Look, she should know better. People are making this a partisan issue. To me, the issue is that too many people are trying to find an exception, or a cheat, or to get around the rules here. We all need to be responsible.