Marco Rubio was roundly criticized when during the 2016 primary he made suggestive remarks about Donald Trump's supposedly small hands. But Joe Scarborough decided to jump right down in the same gutter on Monday's Morning Joe.

Commenting on the loss of Ed Rispone, the Trump-backed candidate in the Louisiana governor's race, Scarborough smirked: "Little hands, little fingers, little coattails." He added, "I love this. Boy, he worked hard. Donald Trump worked so hard to get him elected."

And it’s sad to watch a president beg. But, of course, he’s lying about Kentucky. The thing is, it's incredible. I don’t know if anybody knows this or not, but Matt Bevin was up five points until Donald Trump went there. Son, you lost, you lost six points for him in one day. Is that bad?

That was far from the only scorn that Scarborough heaped on the president in the wake of the Louisiana result. 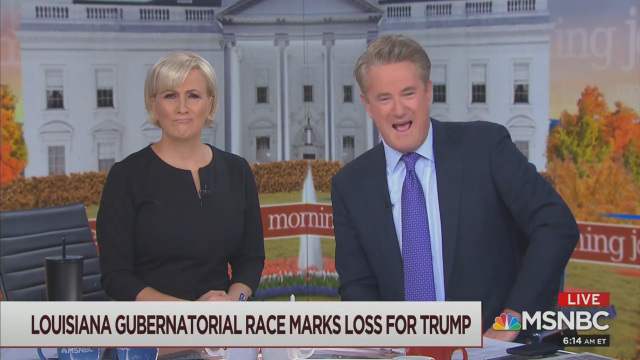 MIKA: You need to do your, hey son, you lost again speech. In Louisiana, Democrat John Bel Edwards on Saturday narrowly won a second term as the state’s governor, beating Republican challenger Eddie Rispone by 1.4 percentage points in a state that President Trump carried by nearly 20 points in 2016. Rispone, a wealthy businessman and long-time Republican donor, tied himself to Trump . . . After winning [Bel Edwards] had a decidedly southern message for the president.

SCARBOROUGH: I love this.

JOHN BEL EDWARDS: Our shared love for Louisiana is always more important than the partisan differences that sometimes divide us. And as for the president, God bless his heart.

MIKA: Oh, that's never a good sign when you hear that! Oh my goodness, I found that out the hard way. GOP challenger Eddie Rispone opponent came up short despite a flood of support from Republicans.

SCARBOROUGH: Donald Trump worked so hard to get him elected.

PRESIDENT TRUMP: In Kentucky, we elected everybody. The governor got brought up in a few short days, 19 points. I went, we made a speech, the whole ticket was there. Everybody won big. Governor’s a really good guy. But 19 points is a big thing, and he lost by just a few thousand votes. And the headlines the next day: Trump took a loss. I lifted him up a lot. So Trump took a loss. so you’ve got to give me a big win please, okay? Okay?

SCARBOROUGH: Yeah, he was begging. And it’s sad to watch a president beg. But, of course, he’s lying about Kentucky. The thing is, it's incredible. I don’t know if anybody knows this or not, but Matt Bevin was up five points until Donald Trump went there. Son, you lost, you lost six points for him in one day. Is that bad?

SCARBOROUGH: Donald, you need to check — I’m from the Gulf Coast. How did you lose Louisiana?

SCARBOROUGH How — what — how could you do that?