"Still ahead, Chicago police blasted Empire actor Jussie Smollett last week, accusing him of staging a hate crime because he was unhappy with his salary. We'll get Chicago Mayor Rahm Emanuel's reaction to the alleged incident, next on Morning Joe."

Well of course they were going to ask Emanuel about Smollett! The apparent hoax took place in Chicago, and has galvanized that city and the country at large for weeks.

So we settled in to watch the panel grill Emanuel on the matter.

But when the ensuing segment began, it opened with an airing of an ad Emanuel has put up, jabbing President Trump about his promise to build the wall. Okay, fine, but surely Smollett was next. Nope. They transitioned to inviting Emanuel to pontificate about who should be the Dem presidential candidate. As the segment wound down, there was no way they weren't going to get to Smollett, right? Wrong. It ended with Rahm being allowed to brag about various programs he'd instituted during his mayoral tenure: "free" pre-K, community college, etc.

The question arises: What happened during the commercial break between Mika's tease and the interview itself? Did Emanuel, in his tough-guy persona, perhaps inform the hosts that he would accept no questions about Smollett?

If that's what happened, Joe and Mika should have either:

Instead, Joe and Mika did neither. Had they bowed meekly to Emanuel's demand?

In addition to asking questions themselves, Joe and Mika gave Nick Confessore of the New York Times, MSNBC correspondent Kasie Hunt, and professor of African-American studies Eddie Glaude Jr. the opportunity to pose questions to Emanuel. None of them broached the Smollett story, either. Looks like the fix was in.

Final point: Not only did Mika verbally claim that Emanuel would be asked about Smollett, the show also did so with the screencap seen below. 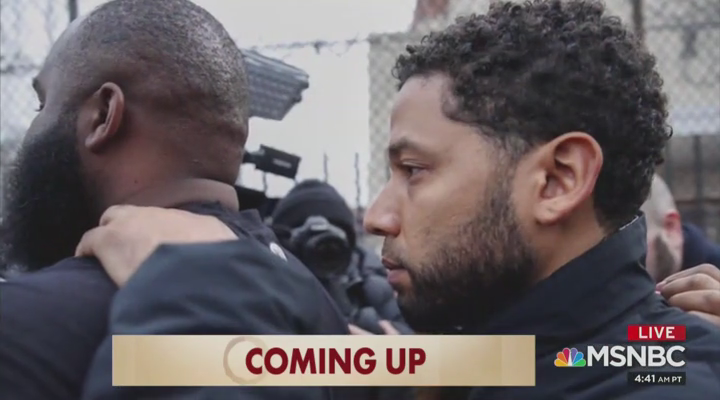