MSNBC's Deutsch: 'Dangerous' Ocasio-Cortez Will 'Hand Presidency Back to Trump'

Democrats are starting to figure out that Alexandria Ocasio-Cortez is the gift that keeps on giving . . . to Republicans.

A few days ago, Nancy Pelosi disdainfully dismissed Ocasio-Cortez's Green New Deal as "the green dream or whatever they call it, nobody knows what it is, but they’re for it, right?”

On today's Morning Joe, there was consensus condemnation of Ocasio-Cortez's opposition to NYC's deal with Amazon  to establish an HQ in NYC, which contributed to Amazon's decision to cancel its plans. Donny Deutsch put it in starkest terms, saying Ocasio-Cortez  is "extremely dangerous," and "does not know what she's talking about."  Deutsch fretted that, from a Dem perspective, Ocasio-Cortez and her socialist sidekicks will "hand the presidency back to Donald Trump."

DONNY DEUTSCH: Joe, I actually called you yesterday, I was so out of my mind; my head was exploding. When you have Alexandria Ocasio-Cortez, who I find extremely dangerous at this point. I hope she doesn't tweet that, who are you Donny Deutsch, I don't care about you or anything. Because basically she has a twitter following: that's her power base. To basically come out and say, as you pointed out, what a great thing it is that we can take that money and give it to teachers. It doesn't exist. It's an abatement. $27 billion, we put down 3. That's business. That's what happens. You attach this to the Green Deal and you are handing President Trump--President Trump now gets to go, oh, the Democrats don't want jobs, the Democrats don't want companies coming to your neighborhoods, the Democrats have a Green Deal, that wants a 70% tax rate, that wants jobs for everybody even if--just handed to you. Tuition, handed to you. Socialism.

We are in a dangerous place, and if people don't, in the party, don't start to speak up against people like Alexandria Ocasio-Cortez, who is young and dynamic, but does not know what she's talking about. And her, and her cohorts, some of these new, fresh, progressive faces, are going to hand the presidency back to Donald Trump.

The panel focused on Ocasio-Cortez's ignorance of basic economics. In celebrating the cancellation of the Amazon deal she somehow imagined that the incentives offered to Amazon now could be distributed to teachers or other causes. She failed to understand that this was an incentive deal, and that there is no such pile of cash laying around. 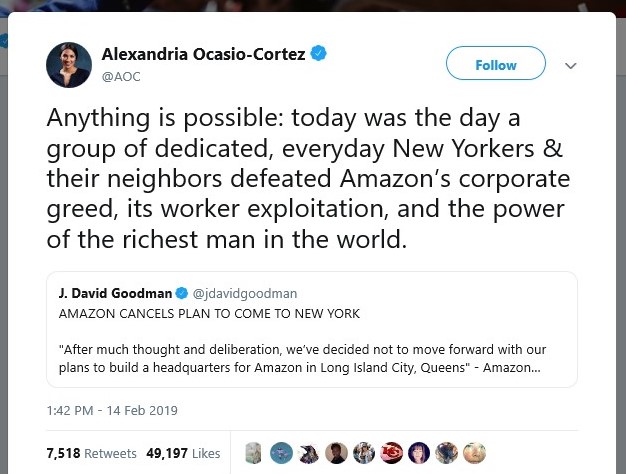 Note: Deutsch worried about Ocasio-Cortez's ability to attack him over his comments, saying: "I hope she doesn't tweet that, who are you Donny Deutsch, I don't care about you or anything. Because basically she has a twitter following: that's her power base." It will be amusing to see how she might send her Twitter minions after Donny.