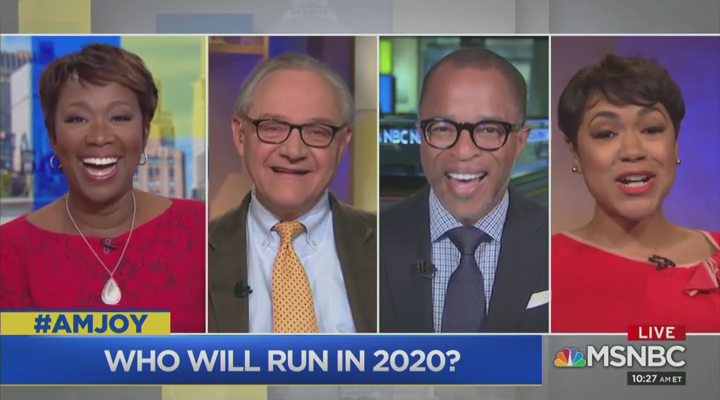 That must be why Barack Obama never won . . .

With the midterm elections behind us, we are now into the 2020 silly-season guessing game. On her MSNBC show this morning, Joy Reid invited her guests to make their picks among the multitudinous Dem contenders. Said Tiffany Cross, co-founder of The Beat DC:

"My number one ticket who can beat Donald Trump by a landslide: Michelle Obama and Oprah Winfrey."

Reid and the other panelists literally laughed off Cross's suggestion [see screencap], with Reid pointing out that they've said they wouldn't run. More importantly, and reacting to polling data Cross cited showing Oprah and Michelle defeating Trump by wide margins, Reid added this:

"We know racially-polarized voting is a real thing and people will say they'll vote for Oprah until she is on the ballot."

So those racist white Americans won't support a black presidential ticket. Reid didn't try to square her view with Barack Obama's two presidential victories, or with the fact that Oprah is wildly popular across a broad swath of Americans, including countless whites.

We're certainly not saying Michelle/Oprah would win. But to dismiss their candidacy because America is so "racially-polarized," i.e., racist, is wrong, and unfairly stigmatizes the great majority of people in this country.

Other notable comments from the panel: The Washington Post's Jonathan Capehart energetically pushed the appeal of Terry McAuliffe as the Dem candidate.  And all the panelists agreed that Kamala Harris would win the Dem South Carolina primary.

TIFFANY CROSS: Here's the big thing. My number one ticket who can beat Donald Trump by a landslide: Michelle Obama and Oprah Winfrey.

JOY REID: They're not running!

JONATHAN CAPEHART: That would never happen.

CROSSS: I know they said they're not running. But Michelle Obama beat Trump by 13 points according to an Axios poll. Oprah beats him by 12 points. Black women have saved this country time and again. They saved Alabama from an accused pedophile.

REID: But we know racially-polarized voting is a real thing and people will say they'll vote for Oprah until she's actually on the ballot.