Does John Berman see himself as a news host, or is he auditioning for a late-night, Trump-trolling, "comedy" gig?

The question arises after CNN's Berman, on this morning's New Day, suggested that President Trump is "full of Schiff."

True, Berman was playing off a tweet in which Trump had [accidentally-on-purpose, presumably], referred to Dem Rep. Adam Schiff as "little Adam Schitt."

But is it Berman's role to report the news, or to use it for purposes of insulting the President of the United States? And far from calling out her colleague, co-host Alisyn Camerota congratulated him: "well played!" 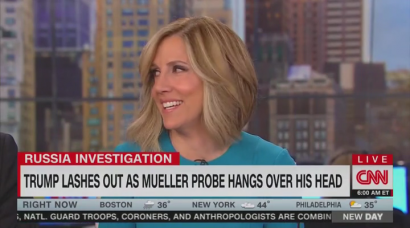 JOHN BERMAN: This is New Day. It's Monday, November 19th, six o'clock here in New York. And this morning, the President clearly has a lot of 'schiff' on his mind . . . The president also targeted Democratic congressman Adam Schiff: take a look. Sixth-graders of the world, unite. Read that first line there. This is the same President who last week said there must be decorum in the White House. Decorum! This does make you wonder that whether, when he said that, he was full of "Schiff."

BERMAN: Did you see what I did there?

CAMEROTA: I did. I heard that.