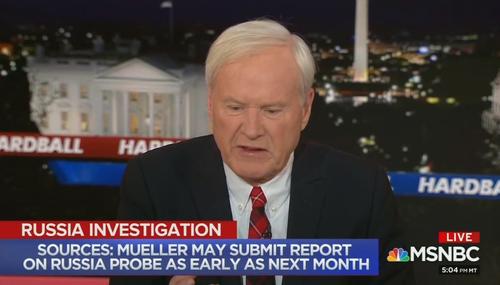 Poor Chris: Mueller Has ‘Mandate’ to Find Collusion Since It’s His Job

Curtis Houck
January 29th, 2019 9:22 PM
Deep breaths, Chris. On Tuesday’s Hardball, MSNBC host/pundit Chris Matthews asserted that Special Counsel Robert Mueller’s entire job (aka “mandate”) is to, instead of letting the chips fall where they may, “unearth any collusion between the Trump campaign and Russia” because that’s “what he was set to find.” 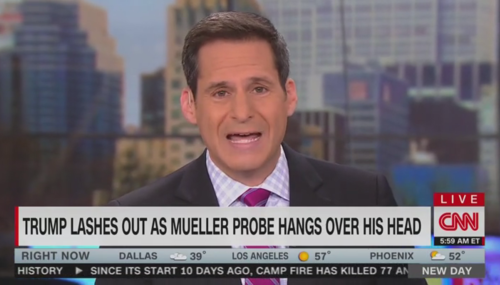 Mark Finkelstein
November 19th, 2018 9:55 AM
Does John Berman see himself as a news host, or is he auditioning for a late-night, Trump-trolling, "comedy" gig? The question arises after CNN's Berman, on this morning's New Day, suggested that President Trump is "full of schiff." 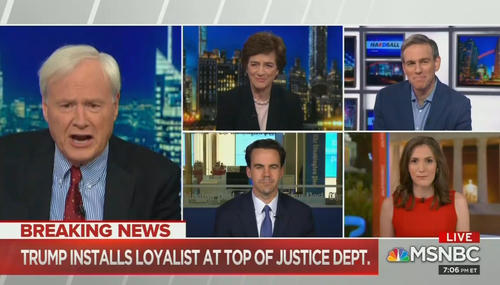 Curtis Houck
November 9th, 2018 1:55 PM
A few segments before his unhinged rant suggesting prayer should be outlawed concerning tragedies like the California bar shooting and that gun rights don’t come from God, MSNBC’s Hardball host Chris Matthews showed his disdain for the President and acting Attorney Matt Whitaker by screeching out of the blue at friendly panelists. This bizarre tangents came to a boil when he didn… 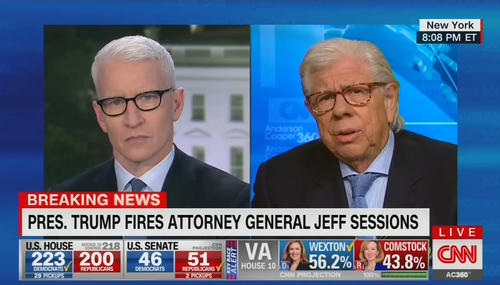 Curtis Houck
November 8th, 2018 5:26 PM
For all of the characters that make up the Jeffrey Zucker-led circus at CNN, perhaps no one speaks in hyperbole more than longtime liberal journalist and CNN analyst Carl Bernstein. In separate appearances Wednesday night and Thursday morning, Bernstein reacted to the firing of Attorney General Jeff Sessions by calling it a “coup” by “a rageaholic President...who has no… 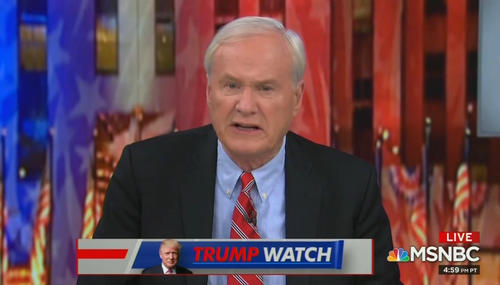 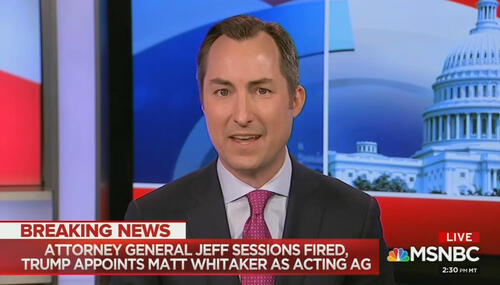 Curtis Houck
November 7th, 2018 6:35 PM
During MSNBC’s hysteria-heavy afternoon show Deadline: White House on Wednesday, two guests of host and failed former Republican Nicolle Wallace diagnosed America as now in the midst of a “national emergency” and on the verge of a “constitutional crisis” that translates into people needing to “take to the streets” to protest the Trump administration…