In her "heart?"  Some cynical lawyerly types might say that presupposes a fact not in evidence . . .

Is Harold Ford, Jr. auditioning for an appointment in a hoped-for Hillary administration?  On Morning Joe of late, he's trying out a variety of dubious defenses.  Last week, as we reported here, his line was that although Americans might see her as a "liar" and "dishonest," nobody thinks she's "unpatriotic."  Today, he claimed that "in her heart" Hillary didn't intend to violate the law. Harold Ford, Jr., heart whisperer.

Joe Scarborough touched things off when he said that if Hillary comes on the show "she's not going to be able to answer the questions," such as who authorized her to conduct State Department business on a private server. When Ford responded that Hillary would have the answers, Mika asked "how do you know?" To which Ford replied "you all express a certain level of certainty on the other side of the issue, and I think it's only fair I can reciprocate and offer the same certainty on the other side."  What's next, Harold?: anything you say bounces off me and sticks to you?  Seriously, if this is the kind of sophistry to which Camp Hillary is reduced . . . 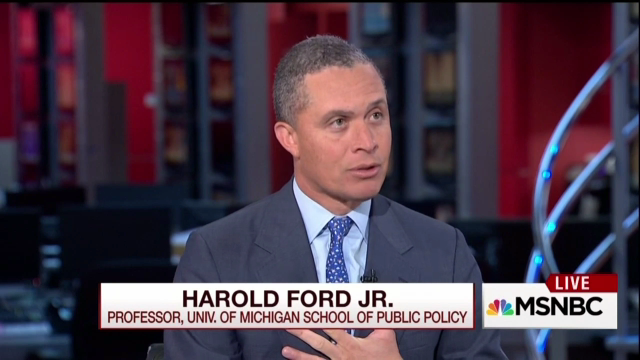 HAROLD FORD, JR.: She's got to tackle this head on and take all comers, including Morning Joe and other shows that want to ask these questions.

JOE SCARBOROUGH: But if she comes on here, she's not going to be able to answer the questions. Who in the State Department allowed you that? Another question --

FORD: -- I disagree with you. I think she can answer these questions. She's got to be willing to come on and layout clearly to the American for the people why she should be president. I saw her several times over the August holiday season, I saw here at a few fund raisers. She was better each time I saw her. If she's willing to do that, which I know she is capable of doing, I mean, answer those questions including yours and Mika's and others, I think she will put this behind her and get back to the campaign she wants to run.

FORD: And I think she will have answers to all those questions. I don't --

MIKA BRZEZINSKI: How do you know?

JOE: I wish she would have on Friday.

FORD: As I said on this show before, number one, I don't think she did anything wrong or intentionally wrong. I don't think that she violated any laws of the country. And I certainly don't believe in her heart that's what she intended to do.