On today's Morning Joe, host Joe Scarborough said that a Senior Fellow at the Independent Women's Forum testifying in favor of assault rifles looked "like a jackass."

Gayle Trotter, who holds undergraduate and law degrees from the University of Virginia and is the co-founder of a D.C. law firm, testified before the Senate Judiciary Committee yesterday.  She argued that having an assault rifle could help a woman defend herself and her children against intruders. Immediately after playing a clip of her testimony, Scarborough said: "if you go out and try to defend assault weapons, then you end up looking like a jackass." Mika Brezezinski agreed: "I'm sorry, but that's true."  View the video after the jump. 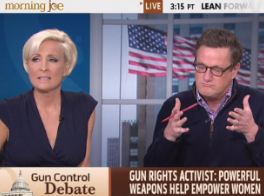 GAYLE TROTTER [clip from Senate testimony]: An assault weapon in the hands of a young woman defending her babies in her home becomes a defense weapon. And the peace of mind that a woman has as she's facing three, four, five violent attackers, intruders in her home, with her children screaming in the background, the peace of mind that she has knowing that she has a scary-looking gun gives her more courage when she's fighting hardened, violent criminals.

Note Deux: Mika Brzezinski wants you to know that the NRA is just profiting off your fear and stupidity. H/t Dan Gainor.