How big of an Obama lapdog is Andrea Mitchell?  Even bigger than ardent Obama fan Chris Hughes. The Facebook co-founder, who bought the New Republic last year, recently scored an interview with President Obama that has been criticized for its generally soft questioning.  But during an appearance on Mitchell's MSNBC show today, even Hughes was more candid about the prez than Mitchell.

When it came to the President's statement during the interview that at Camp David "we do skeet shooting all the time," Mitchell claimed "he didn't say that he was skeet shooting, but he does say that it's one of the practices at Camp David by his guests." Responding, Hughes effectively contradicted her: "Frank Foer, the editor of New Republic, actually asked him point blank 'have you ever fired a gun?' And in response he said "yeah, we go skeet shooting all the time up at Camp David. He and his guests.  Which is news to us and news to a lot of people."  The transcript of the interview makes clear that, contrary to Mitchell's claim, Obama answered in the personal and affirmative.  View the video after the jump. 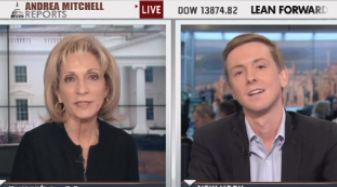 Here's the relevant portion of the interview transcript.


FRANK FOER: Have you ever fired a gun?

PRESIDENT OBAMA: Yes, in fact, up at Camp David, we do skeet shooting all the time.

When the question is whether "you" have ever fired a gun, and the first word out of your mouth in response is "yes," it's pretty hard to claim that he was only speaking about his guests.  But that didn't stop Mitchell for trying to cover for President Obama.