There are few things the liberal media like more than a Republican renegade.  David Stockman has made a career out of strutting his independence from the GOP.  So little surprise that he was an honored guest on this morning's Up With Chris Hayes on MSNBC.

That Stockman repaid his hosts by attacking Republicans was utterly predictable.  Even so, the absurdity of Stockman's particular assertion was breathtaking.  The former Reagan budget director actually claimed that the notion of American exceptionalism, a focus of Newt Gingrich's campaign, is nothing less than . . . "neo-con code" for an aggressive foreign policy.  Video after the jump. 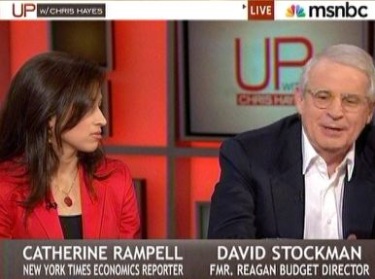 Contemplate Stockman's sheer vacuity.  Can Stockman possibly not know that, that—as acknowledged even on NPR—the notion of American exceptionalism was first coined by that famed neo-con. . . Alexis de Tocqueville?

CHRIS HAYES: I think right now there are two things, what accounts for Gingrich's victory, and I want to play him summing up what his, how he sees the race, this idea about American exceptionalism being on trial and he being its greatest defender.  Here he was talking last night.

NEWT GINGRICH: I believe this campaign comes down to do economics, including jobs, economic growth, balancing the budget, the value of money.  It comes down to national security--what threatens us, what we have to do about it. But the centerpiece of this campaign, I believe, is American exceptionalism versus the radicalism of Saul Alinsky.

DAVID STOCKMAN: But I do want to say a point about exceptionalism.

HAYES: Because that was the key there.

STOCKMAN:  The word is neo-con speak, code for an aggressive foreign policy. It's for more Bush, with even more aggressive intent.  It's about beating the war drums in Iran.  It's about keeping the military establishment--which is vastly greater than we need--fully in place. That's what exceptionalism is about. It's not about our economic problems or jobs or the fact that Main Street is falling behind or that we've done nothing about Wall Street or that we have a Fed out of control or all the other issues that we could mention. That is code for an aggressive foreign policy that I think is the most dangerous thing we could do at the moment.