Latest dispatch from the Department of Dissent Is No Longer Patriotic: because they won't raise taxes, Republican "maniacs" are more dangerous to US national security than al Qaeda.

That is the view of Nicholas Kristof, as expressed in his New York Times column of today, "Republicans, Zealots and Our Security."

View excerpts after the jump.


From the Kristof column [emphasis added]:


If China or Iran threatened our national credit rating and tried to drive up our interest rates, or if they sought to damage our education system, we would erupt in outrage.

Well, wake up to the national security threat. Only it’s not coming from abroad, but from our own domestic extremists . . . the blunt truth is that the biggest threat to America’s national security this summer doesn’t come from China, Iran or any other foreign power. It comes from budget machinations, and budget maniacs, at home.

So let’s remember not only the national security risks posed by Iran and Al Qaeda. Let’s also focus on the risks, however unintentional, from domestic zealots. 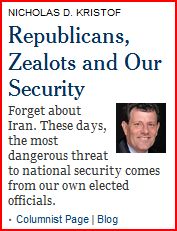