When watching lefty professor and MSNBC regular Michael Eric Dyson, the notion often occurs to me that the man suffers from the condition described above.  Just yesterday, as James Taranto noted in his Best of the Web column at WSJ online, Dyson digressed, during an MSNBC appearance, into a riff to the effect that Republicans are rejecting a debt ceiling increase out of . . . racism directed at President Obama.

Dyson was back at it on MSNBC today. Appearing on Al Sharpton's newly-awarded show in the 6 PM time-slot show, Dyson suggested that the philosophy of Ronald Reagan has been imposed on modern-day Republicans "in a fascist fashion."

Conservative panel member Josh Trevino, who had just described himself as being in the Reagan tradition, understandably took offense, incredulously inquiring: "a fascist fashion?"

AL SHARPTON: So Ronald Reagan was a bad president because he raised the taxes eleven times, so you and Grover would say, let's get away from Ronald Reagan's legacy.

JOSHUA TREVINO: I'm just going to wager, Al, that Grover Norquist and I are a bit more in the tradition of Ronald Reagan than anybody else here on this show at this moment.

MICHAEL ERIC DYSON: The point is, the point is, though, if you subscribe to an orthodoxy, if it's imposed in a kind of fascist fashion and one toes the line because you say you are legitimately faithful to that position --

DYSON: The point is that, yeah, if Ronald Reagan did it --

TREVINO: In a fascist fashion?

DYSON: If Ronald Reagan is seen as the origin of the modern revolution within the Republican party, then you've got a contradiction going on here, Reverend Sharpton. 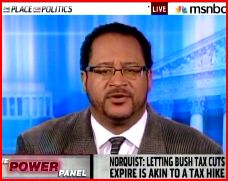