Life was hell under Bush.  But hang in there: things'll get better under Obama.

Class dismissed: that's really all you need to know about the latest Time cover story—The Decade From Hell And Why The Next One Will Be Better.  But just to drive home the Manichean message, Time editor Rick Stengel and Andy Serwer [of Time stable-mate Fortune], who wrote the cover story, appeared on Morning Joe today.

Of course there's the inconvenient detail about Barack Obama having been elected in this decade.  But not to worry.  Serwer suggests we "see Barack Obama being elected as the beginning of the next decade."

Excerpts from the pro-Obama babble . . .

ANDY SERWER: Overall, it was a decade where Americans really suffered.  There was, you know, a deferral of responsibility [translation: taxes not raised enough], neglect, and these things all sort of came home to roost this decade.  So, not a great one. I mean, if you lived in China or Brazil, not a bad decade.  But here in the United States, it was kind of tough.

Suggestion to Serwer: when making a pro-Obama argument, eschew references to things coming home . . . to roost.  Interesting also that Serwer thinks that life was better under a Communist dictatorship than under George Bush.  Andy, there's a train leaving for Peking at noon.  Be under it.  Oh, sorry, forgot: we're in the Golden Age of Obama now.

RICK STENGEL: Andy's point, which I think is really good, is that we're actually, we're too pessimistic about the decade to come, and in fact it's going to turn out to be a lot better than we think, in part because we have a lot of these excesses behind us, and we realize, we realize that we've been irresponsibility [sic], that we haven't invested in our infrastructure, that there are health care problems in America. I mean, the next decade is actually bound to be better [Ed.: unless of course a Republican is elected in 2012, in which case it's Return To Hell].

STENGEL: I think a lot of people have come to question what I think you were driving at: American exceptionalism, the idea that we are removed from the rest of the world in terms of politics, in terms of our economy. But actually we're connected. And a lof of people have felt the confidence in America erode a little bit. I do think the election of Barack Obama as the beginning of the next decade might be a way of kind of reconceiving American exceptionalism.

No doubt.  Obama sees America as not exceptional at all.  No better, and probably worse, than any given Euro welfare state.

STENGEL: Andy's story, despite the fact that it's called The Decade From Hell, and looks back at what happened in the last decade, is actually optimistic about what is going to happen in the future, in part because we recognize the flaws and the mistakes that we made in the last decade. 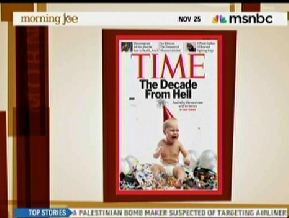