Mitchell Laughs Off the Lipstick: 'He's Not Talking About Palin' 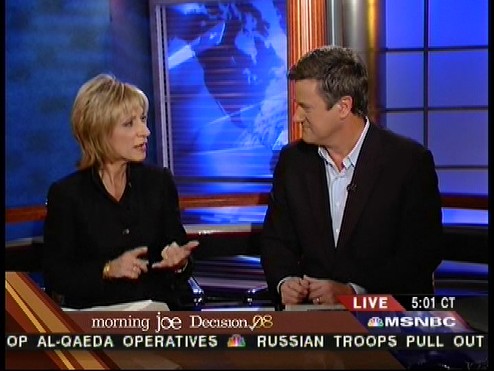 An Obama campaign spokeswoman opened today's Morning Joe with an aggressive defense of his lipstick line, arguing that Obama was being criticized "for saying something that John McCain has said before, that Barack Obama frequently says about 'you can dress something up.' He was talking about the Republican change argument."

A bit later, bolstering her argument, the spokeswoman described the conference call the McCain campaign arranged to respond to Obama's line. She pointed out that all the reporters asking questions on the call were women, and that all of them asked McCain representative Jane Swift "are you serious?" in alleging that Obama was alluding to Palin.

Concluding, the Obama spokeswoman argued that if read in context, "he's not talking about Sarah Palin." Oh, wait.  That wasn't an Obama spokeswoman. It was Andrea Mitchell, sitting in for Mika Brzezinski.

Check out the video and note Andrea's impatient body language as she waited to get off her lines, which she ticked off on her fingers like a good defense lawyer addressing the jury [see screencap].

Joe Scarborough was equally emphatic in letting Obama off the hook. Joe definitively declared that in talking about lipstick on a pig, "I'm sure Barack Obama wasn't thinking about" Sarah Palin's convention speech line about lipstick being the difference between a pit bull and a hockey mom.

Mitchell unintentionally undercut her own argument a bit later, when she chose to read from Maureen Dowd's column of this morning.  Mitchell and Joe made very clear that the column was written before Lipstick-gate.  It contained this line about Palin: "She's already shown that she can shoot the pig, put lipstick on it, bring home the bacon and fry it up in a pan."

So lipstick was very much in the air.  Obama knew darn well what he was saying. So did the people in  his audience, who leapt to their feet, laughing and cheering, at the line.  But, defending Obama, Mitchell and Scarborough were determined to deny the obvious.

Note: what does it say about the MSM as a whole that, as Mitchell reported, every reporter on the McCain conference call dismissed the notion that Obama was speaking about Palin?