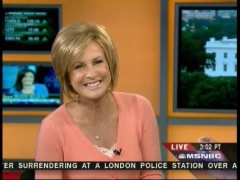 Don't get me wrong.   I'm not suggesting there's anything untoward between Mika Brzezinski and the Dem presidential candidate.  But like the star-crossed couple of the song, the two do share a tragic bond, trapped as they are in an inability to admit they were wrong in opposing the surge.

The depths of Obama's denial emerged during a five-minute segment of his recent interview with Katie Couric.  Couric tried repeatedly to pin Obama down on why he says he still would have opposed the surge, even knowing as he does know that it has succeeded.  As Couric put it: "People may be scratching their heads and saying, 'Why?'"  I'd encourage people to view the exchange, which comes at the five-minute mark of the interview.  CBS video and transcript here.

And there on today's Morning Joe was the other half of the duo in denial, Mika Brzezinski.  With Joe Scarborough playing the role of Couric-like inquisitor, Mika tried to talk about anything but the way Obama was wrong about the surge. 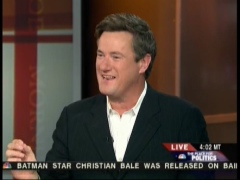 JOE SCARBOROUGH: Right now Barack Obama says the surge was a great thing, many good things come from it, but he's still against it.

WILLIE GEIST: Wouldn't have done it.

MIKA BRZEZINSKI: Ye-a-a-a-h, we're going to find out why.  And we'll talk about, maybe, some of the other issues pertaining to that, as well as the fact that some people --

BRZEZINSKI: Well I'm just saying, there is still the argument about exactly how we got into to this, and whether or not we should be there in the first place and what it accomplishes, and exactly what the state of our military is right now and where we go from here. Having said that—there is a hurricane, we will be following --

BRZEZINSKI: No, but you guys can't talk about the success of the surge like it's the only thing going on.  You have to look at the big picture. It's great that the surge --

BRZEZINSKI: It's fabuluous that they finally got it together.

SCARBOROUGH: I know this is upsetting you, because we're going after your man, but

BRZEZINSKI: But the surge is an intrinsic part of the war.  I'd say the surge is something that had to be done in a war that perhaps --

SCARBOROUGH: You won't answer the -- this is what Barack Obama.

BRZEZINSKI: I'm telling you that for five years, this whole thing was botched.

SCARBOROUGH: OK, so this is a summary --

BRZEZINSKI: And you guys are acting like "oh-h-h-h!, we should have done --

SCARBOROUGH: No, but what you're saying, though, sounds exactly like what Barack Obama's saying. Willie, do we have this Katie Couric interview?

GEIST: I was going to say, you sound like Katie Couric. You ask one question, she answers something else.

BRZEZINSKI: It's, look, I think it's complicated --

SCARBOROUGH: Mika, why, come on, why don't you just admit that he is caught trying to have it both ways?

Why? Because the Obamessiah is infallible.  That's why.

By the way, not to look a gift Couric interview in the mouth, but at one point Obama claimed "there's no doubt that our U.S. troops have contributed to a reduction of violence in Iraq. I said that, not just today, not just yesterday, but I've said that previously."  I suppose that previously, Obama has said pretty much everything. But how I wish Katie had handy these little Obama gems [source here and here] on the surge to quote back to him:
Foreign Policy Iraq Campaigns & Elections 2008 Presidential CBS MSNBC CBS Evening News Morning Joe Video Mika Brzezinski Willie Geist