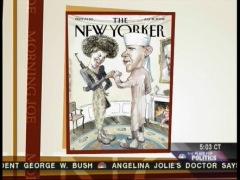 Look for Mika Brzezinski outside the Danish embassy.  True, the Danes had nothing to do with the New Yorker's publication of the Obama cover. But what more time-honored locale to protest an irreverent cartoon of a figure adulated with religious fervor?

Mika has condemned the New Yorker cover as "dangerous."  Why dangerous?  Mika doesn't quite say.  But by darkly musing about unspoken perils that derive from the mocking of Obama, she would apparently place irony about her candidate off limits. Mika sounded the alarm on today's Morning Joe. 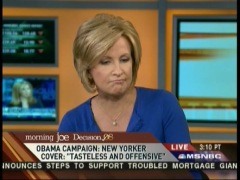 JOE SCARBOROUGH: There are a lot of people shocked and stunned and deeply saddened that the New Yorker would actually employ a device --

MIKA BRZEZINSKI: Look at this!

SCARBOROUGH: Because nobody will know from the burning American flag in the fireplace and the picture of Osama Bin Laden on the White House walls that this is all a joke, and everybody's whining "how dare they?" They're shocked and stunned.

BRZEZINSKI: N-o-o-o. It's a dangerous joke.  It's dangerous, I think.

WILLIE GEIST [incredulously]: How is it dangerous?

BRZEZINSKI: We'll talk about it.

A bit later, they did, but Mika shed very little light on just what was dangerous about the cartoon.

SCARBOROUGH: Here's the New Yorker.  And I'm sure the Obamas are upset at this.

BRZEZINSKI: I'm a little upset at it. And I'm not in the tank. [N.B.--the Mika doth protest too much.]

SCARBOROUGH: Mika says this is dangerous.

After Willie read the reactions from the Obama camp and the New Yorker, Mika continued her murky exposition of the dangers of the cartoon.

SCARBOROUGH: Alright, so, Mika, tell me, why do you think this is dangerous?

BRZEZINSKI: I just think this is the whole discussion we've been having for a year about Barack Obama as a potential nominee, which he is now, and that it is dangerous to go after him.  There are different dimensions and layers of danger, revolving around race and . . .

BRZEZINSKI: Religion, and frankly, you know, I think that every time something like this happens, there's potentially more fallout then with another candidate.

Reading between the lines, I'm guessing Mika was suggesting that criticism of Obama could provoke violence against him.  If so, why not spell it out rather than drop inchoate hints? But when Mika says "it is dangerous to go after him," it's as if Brzezinski would place irony about Obama out of bounds.

Let's see if we understand the ground rules.  Accusing McCain of promoting an Iraq war by which, as the bumper sticker says, "thousands died": no problem. Joking about Obama: dangerous and off limits.  As Mika would say: O-k-a-a-y.

Note: For reaction to the cartoon from the Obama campaign and the netroots, see Noel Sheppard's item here.