Barnicle: Bloggers 'Nitwits Who Think They're Part of News Media' 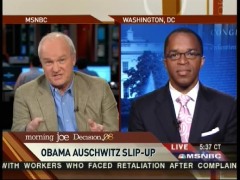 You pathetic little people of the blogosphere. You're nothing more than "nitwits at home with [your] computers" who've deluded yourselves into imagining you're "part of the news media." Just ask Mike Barnicle. The former Boston Globe columnist broke the tough truth to us on today's Morning Joe. WaPo editorial writer Jonathan Capehart was "so glad" to agree.

Capehart was in full courtier mode to Mika Brzezinski, anchoring the show during Joe Scarborough's extended absence awaiting the birth of a child home in Florida. When executive producer Chris Licht read a viewer email critical of Mika, Capehart leapt to her defense, and it was then that Barnicle and he sniffed at the pretenders of the pajamahadeen.

CHRIS LICHT: This one is from John in Tampa: "It's shameful how Mika won't mention the Auschwitz gaffe by Obama, but she will mention everything bad about Bush and McCain. She's once again proven she is drinking the Obama Kool-Aid."

MIKA BRZEZINSKI: OK, my brother, who works for the McCain campaign, I don't think he feels that way. ['Scuse me? Mika likes to use her McCain-supporting brother as a shield against criticism of her liberal bias, but here it makes no sense. Is she saying that her brother tells her that she is not an Obama fan? Did Mika mean to cite her other brother, who works for Obama, and who perhaps claims that she is at times critical of Barack? In any case, Capehart then played the courtly gentleman.] Let's bring in Washington Post editorial writer Jonathan Capehart. He joins us live from Washington this morning. Jonathan, what is the Auschwitz gaffe, and does it merit prolonged discussion?

BRZEZINSKI: Well, but I'm in the tank apparently if I don't talk about it.

CAPEHART [chuckling]: Well look, he mentioned, I mean it's unfortunate he mentioned the wrong concentration camp, but to blow this up into some kind of scandal of huge proportions that somehow shows that Barack Obama is not prepared to be president is really stupid. It really is stupid.

BRZEZINSKI: Well, you've got to tell that to John in Tampa.

MIKE BARNICLE: What about this theory, Jonathan, about, you know, the Auschwitz-Buchenwald flap, whatever, John McCain's misspeaking in Iraq. Shiite, Sunni. What about the theory that we in the news media have taken ourselves so seriously, because of this 24-hour news cycle that we're all involved in, that we don't give enough credit for people being over-tired, exhausted, campaigning 20 hours a day, misspeaking—including Senator Clinton at times misspeaking—and then we jump all over them. And then these nitwits at home with their computers, these bloggers, who [snorts] think they're part of the news media, can then accuse us of being soft on this candidate or that candidate. Just a theory.

CAPEHART [who laughed heartily as Barnicle blasted "these nitwits"]: Well, you're right. Both sides of this argument are correct. Look: when Senator Clinton—if Senator Clinton had said that, there'd be breaking news, we'd be talking about it for days and days and days. I think that at some point, someone has to finally say alright, look, enough. The person, the person is tired, the person has made a mistake. Let's talk about the substance of what he or she is saying. And I think the substance of what Senator Obama was saying is right: you know, talking about I think it was post-traumatic stress disorder in his, I think it was his grandfather, who had come back from World War II, came home, went up into the attic, and never left the house for six months.

That's what he was talking about, and I think if we can just—you know, Barnicle you're right, sometimes we take ourselves way too seriously and react a little too quickly to, you know, bloggers who, and I'm so glad you said that, who think that they are part of the news media, having them whip us into a hysteria, thinking this is a big story, when it's not.

Ironic that both Barnicle and Capehart would chide the news media for taking itself "too seriously," then turn around and look down their news media noses at us schlubs of the blogosphere.

Note: It was the Purple Avenger at Ace of Spades who apparently broke the story of Obama's Auschwitz confusion and Michelle Malkin who helped get it out. Keep up the good work, and maybe someday you too can be members of the real news media. You know, the kind that work at papers like the Washington Post, so straitened even its most venerable columnist is accepting a buy-out.

Interesting take by Allah-the-P at HotAir:

Karl and the 'Busters are indignant, sufficiently so that I’m guessing this will be of some interest to our readers, but I honestly couldn’t care less. I don’t mind being reminded that I’m not part of the news media; I happily concede the point, if by “news media” he means reporters. (If he means we’re not part of the media at all, how’d the Obama/Auschwitz thing end up on MSNBC’s plate?) What he misunderstands is that blogger antagonism towards the press, at least among the blogs I read, has always been less about “elevating” blogs to parity with journalists than denying that most journalists operate on some elevated plain to begin with.