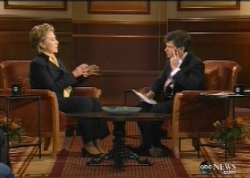 My two cents say George Stephanopoulos gave Hillary a harder time than Tim Russert did Obama during their respective appearances on This Week and Meet the Press today. Russert never pinned Obama down on exactly what he knew of Rev. Wright's most controversial assertions and when he knew it.

Over on ABC, Stephanopoulos twice challenged Hillary to name a single economist who supported her proposal for a gas-tax holiday, and threw in her face the fact that even her big admirer in economist ranks, Paul Krugman of the NY Times, has criticized her over it. In exposing her inability to name a single practitioner of the dismal science who supported her plan [McCain, who's also called for a gas-tax holiday would presumably be similarly hard-pressed], Stephanopoulos left Clinton looking like a panderer. Stephanopoulos raised the issue right out of the box.

GEORGE STEPHANOPOULOS: Nearly every editorial board and economist in the country has come out against [your gas-tax holiday proposal]. Even a supporter of yours, Paul Krugman of the New York Times calls it "pointless and disappointing." Can you name one economist, credible economist who supports the suspension?

CLINTON: Well, you know George, I think we've been for the last seven years seeing a tremendous amount of government power and elite opinion basically behind policies that haven't worked well for the middle class and hard-working Americans. From the moment I started this campaign I've said that I am absolutely determined that we're going to reverse the trends that have been going on in our government and in our political system because what I have seen is that the rich have gotten richer, a vast majority—I think something like 90% of the wealth gains over the last seven years, have gone to the top 10% of wage earners in America.

STEPHANOPOULOS: But can you name an economist who thinks this makes sense?

CLINTON: No. Well, I'll tell you what, I'm not going to put my lot in with economists because I know if we did it right—if we actually did it right—if we had a president who used all the tools of the presidency we would design it in such a way that it would be implemented effectively.

So Hillary's not going to put her "lot in with economists." I wonder on what other issues she'll ignore their advice?

In the discussion that preceded Hillary's admission that she couldn't name an economist who supported her tax-holiday proposal, Clinton made a very misleading statement regarding the cause of high oil prices. In claiming that "there's been market manipulation," Hillary stated:

I am absolutely convinced that these record profits of the oil companies are a result of a number of factors beyond supply and demand. I think there's been market manipulation. In fact, an ExxonMobil official testifying under oath before the House of Representatives committee, said that if it were just market factors then the price of oil would be like $50 or $55 a barrel. We know that there's market manipulation going on, so I would launch an investigation if I were president right now by the Department of Justice and the Federal Trade Commission.

Hillary was clearly implying that the ExxonMobil exec gave evidence buttressing her allegation of market manipulation. He didn't. Clinton was almost surely referring to the testimony on April 1, 2008 before the House Select Committee on Energy Independence and Global Warming by Stephen Simon, Senior Vice President, ExxonMobil. I haven't uncovered the transcript of Mr. Simon's testimony, but here's how committee described Simon's testimony in an official press release [emphasis added]:

[T]he number two executive at ExxonMobil testified before this Committee that speculation, along with geopolitical instability and a weakening dollar, was responsible for half of current oil prices – that based only on supply and demand, the price of a barrel of oil should only be $50-$55!

Simon made no mention of the "market manipulation" to which Hillary referred. Rather than supporting Hillary's dark suggestion of a vast oil-wing conspiracy, the executive ascribed the portion of the prices in excess of $50-55/barrel to "speculation, geopolitical instability and a weakening dollar." He certainly didn't testify to the existence of a price-fixing scheme. For that matter, I don't know where the exec studied economics, but in my book "speculation" is just a pejorative term for market forces.
Congress Economy Oil & Gas Prices Campaigns & Elections 2008 Presidential ABC NBC New York Times Good Morning America Meet the Press Video