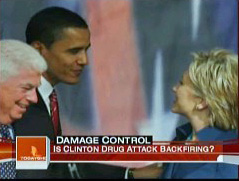 Is the MSM deciding that Hillary is irreparably-damaged goods and that it's time to move on to a Dem with a better shot at winning the White House? You might think so after the Today show's dismemberment of the Clinton campaign this morning.

ANDREA MITCHELL: On top of growing concerns they could not only lose Iowa but lose it big, the Clinton team is now trying to control that growing storm over negative campaigning. But the forced resignation of one top advisor may not be enough. The Clinton campaign is now in damage control, after denying it authorized an attack on Barack Obama for his acknowledged adolescent drug use.

Hours before the candidates were all smiles at this Iowa debate Thursday, Hillary Clinton apologized to Obama. He told her leadership had to come from the stop to stop negative campaigning. Shortly afterward, Clinton's New Hampshire co-chairman Bill Shaheen resigned, saying he regretted telling the Washington Post Republicans could attack Obama for using drugs and he went further, saying Republicans could ask, when was the last time, did you ever gave drugs to anyone, did you sell them to anyone? That is a far cry from what Obama acknowledges, teenage drug use, which he warns children against. Obama said it's been used against him already as he told Tom Brokaw in 2004.

TOM BROKAW: Aren't the Republicans going to come after you on that?

BARACK OBAMA: You know, they already have. It's important that elected officials like myself don't pretend that we're perfect but simply to say that we progress and as a consequence of that progression maybe can give something back.

Mitchell then drew an invidious comparison between Obama's openness and the slick way Bill Clinton dealt with the drug issue.

MITCHELL: It is very different from the way the first Clinton campaign handled the drug use.

Cut to the infamous Clinton clip.

BILL CLINTON: I experimented with marijuana a time or two and I didn't like it and didn't inhale.

BARACK OBAMA: It's not something I'm proud of. It was a mistake as a young man. But, you know, I mean, I'm not going to -- I never understood that line. The point was to inhale.

Andrea was far from finished.

MITCHELL: But even after Hillary Clinton's campaign apologized for bringing up the issue, on MSNBC's Hardball, Clinton's top strategist Mark Penn raised it again.

MARK PENN: The issue related to cocaine use is not something that the campaign was in any way raising and I think that's been made clear.

Mitchell ended with some acid analysis.

MITCHELL: Despite denials that that attack was deliberate, Clinton allies have been openly frustrated that people are not paying more attention to Obama's teenage drug use. And their problem now is that that is exactly the kind of politics that Iowans say they don't like.

RUSSERT: The Clinton campaign understands that there is a huge backlash about this kind of behavior. A former Washington Post reporter Tom Edsall on Tuesday, Matt, wrote that Clinton allies were pushing this story. The next day Mr. Shaheen in New Hampshire drops it. So there's a lot of finger pointing going on. In our polling, the Clinton campaign was identified as the most negative campaign in Iowa, New Hampshire and South Carolina. So there's a problem here that they have to deal with.

The fallout is considerable in [New Hampshire]. If you read any of the newspapers and monitor the media, Matt, and it's very negative. People thought it was a dirty trick and they simply don't like it.

The duo closed with a final dagger, emphasizing the moment from yesterday's Dem debate that was simultaneously Barack's best and Hillary's worst.

MATT LAUER: If there was a highlight in that debate, it came during a question to Barack Obama and an exchange, then, between Senator Obama and Senator Clinton. Let's take a listen.

Roll clip of the moderator asking Obama how he can offer change given that he has so many former Clinton administration officials in his own campaign. Hillary can be heard cackling, saying "I want to hear that."

OBAMA: Well, Hillary, I'm looking forward to you advising me as well.

LAUER: It's a good line. He got off a very good line, and I think what it shows is he's feeling the momentum. He's dealing with a lot of confidence right now.

RUSSERT: Matt, you're absolutely right. You know Barack Obama has not been the best debater in all these debates. Hillary Clinton has gotten very high marks. But now that he is perceived as the front-runner in Iowa in many polls, he seems to have a greater sense of confidence and he's a very good counter-puncher as we saw there. It was a line that tested extremely well with focus groups monitored after the debate.