VIDEO MSNBC's Scarborough Disparages Mark Penn: 'Does He Have a Fox News Contract?'

During Wednesday’s edition of Morning Joe, co-host Joe Scarborough took shots at former Clinton pollster Mark Penn, who wrote an op-ed in The Hill entitled “Stopping Robert Mueller to Protect Us All.” Scarborough tried to impugn Penn’s motives for advocating an end to the Russia investigation, wondering “what is Mark Penn selling coming to the defense of Donald J. Trump” and repeatedly asking if he has “a Fox News contract?”

The mainstream media has recently gotten all excited over the discovery that the Russians purchased $100,000 worth of Facebook ads during the 2016 election season. Of course, almost any rational observer would realize that $100,000 is mere chump change in the grand scheme of things during a campaign in which many millions were spent on ads and commercials.

One person who made a very detailed analysis as to the absurdity of the Russians influencing the U.S. election via those Facebook ads is quite surprising considering his background. It is former 2008 Hillary Clinton campaign chief stragegist Mark Penn who in the October 15 Wall Street Journal mocked the notion of Russian influence via Facebook ads in You Can’t Buy the Presidency for $100,000:

On Thursday's CBS This Morning, Bill Plante pointed out that "a new poll shows President Obama's support slipping in one key demographic that helped him win in 2008: white men." However, Pew Research Center's presidential exit poll from that year found that Obama actually lost 57 to 41 percent to Republican candidate John McCain.

Plante noted "concern in Mr. Obama's own party that his economic message in recent months is not connecting with voters," but led his report with a silver lining for the chief executive: "The President...has been claiming for months that he inherited the nation's economic problems, and in the new Gallup poll, more than two-thirds of Americans agree. They say that former President George Bush deserves either a moderate amount or a great deal of blame."

Hours before President Obama is to unveil a proposal to raise taxes on America's rich, one of former President Bill Clinton's key advisers has come out strongly against the current White House resident and this move.

For this reason, Mark Penn's "Obama -- Don't Bring Back Class Warfare," published at the Huffington Post Sunday evening, is destined to raise a lot of eyebrows on both sides of the aisle:

Before that charge, Matthews, who has frequently condemned Sarah Palin for her use of "gun play" language, used his own violent imagery to depict a struggle between the GOP and the Tea Party. In a teaser, Matthews claimed "the Tea Party is out for scalps" and then in the ensuing segment questioned if, by joining with the Tea Party, the GOP was "dancing while they shoot at their feet here?"

Matthews also went after some of his favorite targets, Bachmann and Palin, as he accused the Minnesota Congresswoman of "strange behavior" and applauded his Republican guest for thinking the former Alaska governor wasn't "worth anything."

(video, audio and transcript after the break)

CBS’s Smith: Is Sarah Palin a ‘Drag’ on the Republican Ticket?

On Wednesday’s CBS Early Show, co-host Harry Smith talked to former Hillary Clinton campaign strategist Mark Penn and former Bush advisor Karen Hughes and asked about Sarah Palin’s effect on the presidential race: "Well, give us some perspective, Karen Hughes, first, on Sarah Palin, turned the world on its ear when her nomination was announced. It now seems, would you agree or disagree. Is it -- is it still a positive? Or is it beginning to be a drag on the Republican nominee?"

Smith went on to cite a new ABC News poll that gives Barack Obama a nine point lead over John McCain and asked Penn: "How do you explain it?" Penn replied: "Well, Sarah Palin's not going to help in an economic crisis. I think what the people are seeing is that there -- there is a 3:00 A.M. call here, and it's an economic crisis. They think -- they see Obama answering that. He's the kind of person who can be a president in a complex situation like this economic crisis, a manager. And I think that's changing the polls." Rather than challenge Penn’s assertions, Smith wanted to move on, but not Hughes:

HUGHES: Also, even the New York Times conceded, though, that he has no record on these kind of issues-

HUGHES: Senator McCain does have a record- 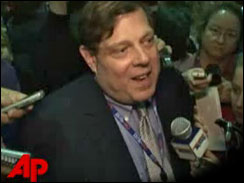 A former aide to Hillary Clinton's campaign has told CBS News that the media have been much harder on Republican vice presidential nominee Sarah Palin than the other candidates in the race, and as a result "have growing credibility problems."

In an interview posted at CBSNews.com Friday, Mark Penn eviscerated the press for "going through every single expense report that Governor Palin ever filed" whilst showing no similar interest for those of Barack Obama, Joe Biden, or even John McCain.

Readers are warned to strap themselves in tightly, for Penn spoke more plainly about media coverage of this election cycle than most in his party can tolerate (emphasis added, h/t Jennifer Rubin, photo courtesy CBSNews.com):

Can it be a coincidence that just hours after Bob Novak published his column reporting that it's unclear just who is directing Hillary's campaign--Mark Penn or Geoff Garin--the latter dashed off an email to supporters claiming to be in charge? But if Garin really does have the reins, why is the campaign employing tactics that Novak suggests would be worthy of the "kamikaze" Penn?

Schultz Defends His ‘McCain is a Warmonger’ Comment on CNN

Liberal talk show host Ed Schultz, appearing on Monday’s "American Morning" on CNN, defended his labeling of John McCain as a "warmonger" at a recent Obama campaign fundraiser, despite the statement being repudiated by Obama’s campaign. Twice, Schultz stated that "the man [McCain] is a warmonger" and used the term a total of five times during the course of the interview. Not only did Schultz defend his remark, he also claimed that McCain mistreated his fellow veterans with his votes on veterans’ benefits. [Audio available here.]

Co-host John Roberts, who interviewed Schultz, compared the talk show host’s remark to Bill Cunningham’s use of Obama’s middle name "Hussein" at a February 2008 McCain rally and how the Republican candidate repudiated Cunningham. At the same time, Roberts didn’t press Schultz too hard on the "warmonger" labeling.

Joe Scarborough and David Shuster came not to praise Penn but to bury him . . .

Chatting on today's Morning Joe, the host and the MSNBC political correspondent agreed that the mistake in firing the chief Clinton campaign strategist was that it didn't come nearly soon enough.

JOE SCARBOROUGH: For the Clintons, not a good weekend. Mark Penn, bounced out, my question is why now? They should have done it a long time ago. Good news, bad news?

"It's disgusting for him to do this . . . that's just disgusting." -- Clinton supporter Hilary Rosen.

Mark Penn sleeps with the fishes. Metaphorically speaking only, of course.

On this evening's Tucker, Clinton's chief campaign strategist came in for some industrial-strength opprobrium from two prominent members of Team Hillary for his attempt to flee what might be a sinking ship.

Here in Ithaca and no doubt in other liberal bastions across the land, you can still see cars festooned with those bitter bumper stickers: "Re-Defeat Bush!" and "Bush: Selected, Not Elected!" Those sentiments remain reflected in an MSM still smarting from Florida 2000. All of which made Ann Curry's words on this morning's Today, announcing the ascendancy of Raul Castro in Cuba, so ironic.

ANN CURRY: In the news this morning, we begin with Cuba and its [first] new president in nearly half a century. Raul Castro was officially chosen on Sunday to take over from his brother Fidel who announced his retirement last week.