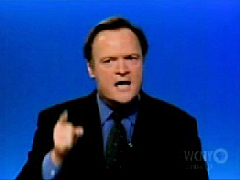 Lawrence O'Donnell, already infamous for his in-your-face rant at John O'Neill of the Swiftboat Veterans, is at it again. This time, the object of O'Donnell's obloquy is Mitt Romney, and in particular his Mormon religion. Appearing on last night's McLaughlin group, O'Donnell indulged in an angry, protracted condemnation of Mormonism.

Excerpts:
View video here.
O'Donnell used his show-ending prediction to round on Romney again: "The mainstream media will remain united in its refusal to ask Mitt Romney any questions about the history of his racist, pro-slavery, anti-American and otherwise inexplicable religion."