Matthews: 'Just By His Name' Barack Best at Dealing With Muslim World 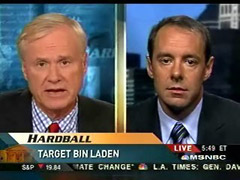 What's in a name? For Chris Matthews, a lot.

CHRIS MATTHEWS: Do you have a sense, though, well certainly I have it, that just by his name, Barack, ah, Barack Hussein Obama, by his background, having grown up in Indonesia which is a largely Muslim country, that he would have a feel perhaps other presidential candidates don't have of how to connect with that part of the world, the billion people, that we seem to have such a problem connecting with and avoiding war with.

David Mendell, author of Obama, a biography of the candidate, gently brought Chris back down to earth.

DAVID MENDELL, AUTHOR "OBAMA" BIOGRAPHY: Well, he certainly would like you to think that. That's part of his biography, that's part of what they put forward in the campaign, that he's a multicultural individual. He actually grew up in Hawaii, and spent about four or five years in Indonesia as a young child. But he would like you to think that he understands the world better than some of these candidates who've just lived in the United States all of their lives. He thinks he has a world view that is different than they do, and that's part of his appeal to some people, this interesting biography that he has.

Obama, someone uniquely qualified to avoid war with Muslim countries? Obama, the guy who undermined his own campaign and touched off an internal crisis in Pakistan by threatening to invade it?