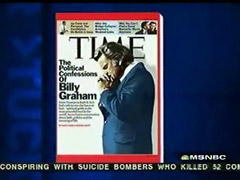 Just when you thought the MSM couldn't sink any lower . . .

Could there possibly be an American who doesn't admire the Reverend Billy Graham? Apparently, yes. Have a look at the cover of this week's 'Time.' Of all the ways the editors might have positioned the logo, they managed to do so in a manner in which the 'M' in 'TIME' is transformed into horns protuding from the good reverend's head.

Tucker Carlson and Willie Geist took up the matter on Tucker's MSNBC show this afternoon.

MSNBC'S WILLIE GEIST: A guy who has advised presidents, the Reverend Billy Graham on the cover of Time Magazine this week. I know the media is secular, but do they have to rub it in? A nice picture there of the reverend praying, but look at the horns above his head. A not-so-subtle message that maybe he's, well, Satan incarnate.

MSNBC HOST TUCKER CARLSON: That is actually . . .. Have people complained about that? Because that's unbelievable.

GEIST: Yeah, there's some chatter on the internet right now, and there's sure to be more.

Note: when Viagra put horns on a man's head in a recent ad campaign, the FDA ordered the images yanked from the air. So what the government considered inappropriate in a Viagra ad, 'Time' considers appropriate in a depiction of the Rev. Billy Graham . .