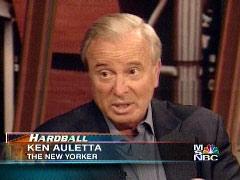 The topic was the New York Times' latest leak. Naturally Auletta thought it was OK. No surprise there. But all of a sudden, he comes out with this:

"The New York Times is red meat to many elements of the Republican party, and red state voters. It is perceived as a liberal institution. I don't believe it is. Editorially it is, but not in its news coverage."

What? Was it the editorial page that has published not just this latest leak, but the leak of the NSA terrorist surveillance program, and that has been hostile to all things Bush and Republican in a thousand ways the Media Research Center could document from here to Sunday? No. It was 'the news coverage' side. The side Auletta doesn't believe is liberal.

Conservatives need to learn not to be fooled or intimidated by the seeming sophistication of people such as Auletta. They are either dissembling, or not quite as brilliant as they might appear.