Wednesday’s dramatic edition of Morning Joe involved  the assembled cast of sanctimonious liberals seeking to scare Americans with false and exaggerated statements regarding a post-Roe America. For this installment, they used recent speech by a pro-life doctor at a gathering of new University of Michigan Medical School students as a jumping off point, touting how some students walked out in disgust that a physician would have a view in favor of keeping people alive.

Knowing liberal media darling Mallory McMorrow (D) is a state senator from Michigan, co-host Geist gave her the floor to rebuff the doctor and trumpet the pro-abortion students. Predictably, McMorrow commended the students, calling them “incredibly brave.” In the liberal media's Orwellian world, being pro-abortion is apparently a risk when it's the other way around.

McMorrow continued her audition for a contributor gig, decrying the state's “dangerous” abortion law: “There's a long dormant 1931 law currently on the books in Michigan that makes providing an abortion a felony with no exception for age, rape, or incest. So, these young doctors are looking at their own future and if they dare to provide necessary medical care, then they're going to be criminals.”

Naturally, there was no mention of how the Michigan law has an exception for the life of the mother and wouldn't criminalize miscarriages. But when you have money to raise and suburban women to scare, facts go out the window.

The BBC's Katty Kay also lobbed a supposed question about the impact on the upcoming midterm elections. McMorrow praised her state for getting “800,000 signatures” for a state amendment codifying abortion into state law.

Frequent contributor and plagiarist Mike Barnicle then took a turn:

“The very word "abortion" sort of an awkward thing to talk about, especially I think for men. And it's quite noticeable that from state to state to state, the most ardent proponents of really restrictive abortion procedures, abortion laws happen to be men, legislators, state senators, state representatives. What are your thoughts on that?”

This led to McMorrow complaining that “we have been told as women not to talk about our sex lives. It's not polite conversation.” She further complained about how women are told “to not talk about abortion.” 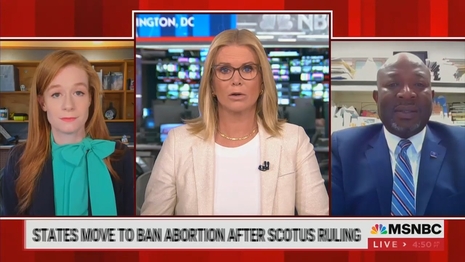 McMorrow even talked about the abortion procedure D&C because she needed her IUD “surgically removed” to save her life. “And thinking again about the University of Michigan doctor students, if they are no longer able to be taught these procedures then I might not even be here today,” she exclaimed.

Again, if a woman needs to terminate the pregnancy to save her own life, it's not only broadly excepted by society, but many of the pro-life states, MSNBC personalities and viewers fear allow for saving the mother's life.

Kay then set up Indiana State Senator Greg Taylor (D) by asking him about tragic stories such as a 10-year-old rape victim driving to his state to terminate her pregnancy. Like catnip for the ears of Morning Joe, Taylor made a doomsday prediction: “I expect to see it happen across the country as we continue down this path.”

Morning Joe knew that they could spread their pro-infanticide rhetoric if they set up these politicians with the right questions and they took the bait. This was the liberal media at its finest.

This example of purposeful liberal setups was sponsored by Comcast and Discover.

WILLIE GEIST: Senator McMorrow, let me begin with you and what happened at the University of Michigan where a doctor was speaking, Dr. Collier, a member of the staff who had been there a long time who recently became anti-abortion, she'd long been pro-choice. And as we saw some of the doctors – future doctors at the ceremony walked out in protest. What did you make of their actions there, the university defending their decision to have that speaker there?

SEN. MALLORY MCMORROW (D-MI): I think that these students are incredibly brave and we have to remember this is a day that medical students have worked their entire lives for. There's a long dormant 1931 law currently on the books in Michigan that makes providing an abortion a felony with no exception for age, rape, or incest.

So, these young doctors are looking at their own future and if they dare to provide necessary medical care, then they're going to be criminals. So, good on them for using their voice for standing up, for walking out, especially in this moment, we need them now.

KATTY KAY: Senator, to what extent do you think that the students who walked out – and it seems like there were – I'm not sure how many but a few dozen at least from the images. To what extent did they—representative of a broader mobilization of protests against the overturning of Roe v. Wade that may have an impact in the midterm elections?

SEN. MCCMORROW: I think they are very representative of an overwhelming majority here in Michigan. We have been circulating a ballot initiative that is citizen-led to codify access via an amendment to our state constitution. That just turned in almost 800,000 signatures collected by real people. That is the most signatures of any ballot initiative in state history.

I think that the reality is these students look at the law on the books in Michigan, realize how archaic it is as do most Michiganders and know that they have to push back on it in any way that they can.

JONATHAN LEMIRE: Senator Taylor, let’s shift to your home state of Indiana. The Vice President was just there the other day. The state legislature is about to take up a session that could ban abortion there in the state. Give us an update as to where that stands and what Democrats are trying to do to push back.

SEN. GREG TAYLOR (D-IN): Well, thank you for having me this morning. The state of Indiana has a Senate Bill 1 is a ban on abortion in the state of Indiana. Yesterday in committee, there was a change to the actual bill language to add provisions that would allow for women who are under the age of 16 to have up to 12 weeks to claim rape or incest as—and then for children over 18—over 16, you would have to claim that you're a victim of rape or incest by eight weeks after fertilization. And there's an additional defense for the life of the mother. But other than that it's a -- it's a total ban on abortion.

MIKE BARNICLE: Senator McMorrow, the very word "abortion" sort of an awkward thing to talk about, especially I think for men. And it's quite noticeable that from state to state to state, the most ardent proponents of really restrictive abortion procedures, abortion laws happen to be men, legislators, state senators, state representatives. What are your thoughts on that?

SEN. MCMORROW: I think that that is indicative of—we have been told as women not to talk about our sex lives. It's not polite conversation. We've been told not to talk about abortion when the reality is one in four women have likely had an abortion at some point in their lifetime and it's very hard to get pregnant, to stay pregnant and to do so in a healthy way.

I myself—I gave birth to my daughter about a year and a half ago and shortly after I had an IUD placed, that IUD punctured through my uterus and I had to have it surgically removed and it required a DNC which is the most common abortion procedure. And thinking again about the University of Michigan doctor students, if they are no longer able to be taught these procedures then I might not even be here today, and that is a very common experience.

So we're in place. And you’re right, it’s a lot of male legislators who have never had to think about this, but also as women, we’ve been told not to talk about it, and we have to.

KAY: Senator Taylor, to Senator McMorrow’s point, we've heard horror stories since the Supreme Court ruling of women who were having a miscarriage and needed a DNC in their state and they couldn't get one and the doctors were making them carry dead fetuses for two weeks. We’ve heard of girls getting raped and having to cross state lines.

Do you think that when we hear those stories, the stories particularly surrounding miscarriage and perhaps the unintended consequences and it is not clear that the Supreme Court really thought through what the impact of that ruling would be overturning Roe v. Wade on women who were in the middle of a miscarriage and needed a DNC, for example.

Are those stories having any impact do you think in a red state like Indiana on people's minds? Are people starting to question whether actually there are consequences from the Supreme Court ruling that they haven't anticipated and they don't particularly want?

SEN. TAYLOR: Yes. Absolutely. We just had a ten-year-old who was the victim of rape in Ohio have to come to the state of Indiana to receive an abortion, and our attorney general here in the state of Indiana actually is looking into the doctor who provided the abortion for this 10-year-old who was a victim of rape. And those examples are going to pop up all over the country because of this ruling that took away a constitutional right for women to control their own healthcare.

So, yes, we've seen it. We've actually experienced it here specifically in the state of Indiana, and I expect to see it happen across the country as we continue down this path.