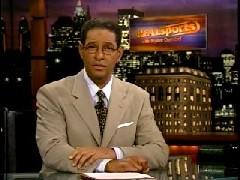 Let us try, for a moment, to imagine a media figure. Let us assume that this figure has been a major media personality for more than 20 years, but has, on occasion, been known for making racially tinged comments. This media personality has built a reputation as an intellectual, so he's aware of what kind of comments can be mis-interpreted or mis-construed.

Now, let us a imagine a professional sports league which is in the process of changing commissioners. It has been an extremely successful league, with billions of dollars in revenue, and a long period of relative labor peace between ownership and the player's union. Let us suppose that the Commissioner in question (we'll call him "Paul Tagliabue") is a white man, and the President of the Players Association ("Gene Upshaw," for short) is a black man.

Now let us imagine that, in a taped commentary, the major media personality says something like the following, in the form of advice for the incoming Commissioner:

Before he cleans out his office, have Paul Tagliabue show you where he keeps Gene Upshaw's leash. By making the docile head of the players union his personal pet, your predecessor has kept the peace without giving players the kind of guarantees other pros take for granted.

Now, remembering the firestorm that surrounded Howard Cosell's calling Alvin Garrett a "little monkey," pondering the journalistic outcry that accompanied Rush Limbaugh's suggestion that the media wanted to see Donovan McNabb succeed because of his skin color, do you think that someone might see racial overtones in that derogatory passage? Do you think it might generate comments from the NAACP? Front page stories in the Washington Post and New York Times?

It would be interesting to see, but I'm skeptical. The media personality in question? Bryant Gumbel. A black man. I predict no outcry whatsoever, save for a brief discussion in the NFL offices as to whether they want to maintain Gumbel in the employ of the NFL network. Not, of course, because of any racial sensitivities, but because he's offended his employers.

I'd like to make it clear that I don't think it was a racist comment. I don't think that the racial arsonists in the American mainstream press should go nuts about this comment, nor do I think Mr. Gumbel should be pilloried for it. But I would think that even if a white man had said it, and I'm skeptical that that would be the response. I'm virtually certain that if a conservative white man said it, it would be a major media story, along the lines of Trent Lott's throw-away comment at Strom Thurmond's birthday party. But Gumbel's a black man, and a beautiful person of the left, and I suspect that this comment disappears without a ripple. I could be wrong, of course. But I don't expect that I will be... (The entire clip runs about 36 seconds, and can be seen here.)