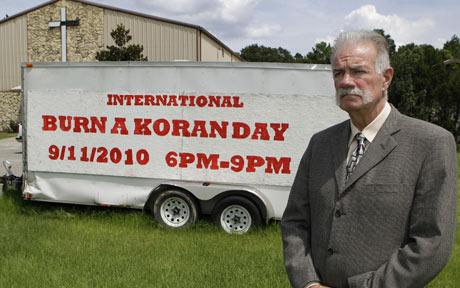 UPDATE (9/30 - 1:13 pm): The Society of Professional Journalists emailed me requesting a correction. Clarification - though no correction - below the fold.

When American religious leaders spoke out against the planned burning of Korans by a crazy Florida pastor, it was a hot news item. Likewise, when another group of clergy condemned the supposed "anti-Muslim frenzy" in the United States, the media ate it up.

But when, on Tuesday, scores of prominent American and Canadian Muslims spoke out against "threats that have been made against individual writers, cartoonists, and others by a minority of Muslims" with the express purpose of silencing speech, the media was conspicuously silent. It remains so today.

"We, the undersigned," declares a petition at the website of The American Muslim, "unconditionally condemn any intimidation or threats of violence directed against any individual or group exercising the rights of freedom of religion and speech; even when that speech may be perceived as hurtful or reprehensible."

We are concerned and saddened by the recent wave of vitriolic anti-Muslim and anti-Islamic sentiment that is being expressed across our nation.

We are even more concerned and saddened by threats that have been made against individual writers, cartoonists, and others by a minority of Muslims. We see these as a greater offense against Islam than any cartoon, Qur'an burning, or other speech could ever be deemed.

We affirm the right of free speech for Molly Norris, Matt Stone, Trey Parker, and all others including ourselves.

As Muslims, we must set an example of justice, patience, tolerance, respect, and forgiveness...

Islam calls for vigorous condemnation of both hateful speech and hateful acts, but always within the boundaries of the law. It is of the utmost importance that we react, not out of reflexive emotion, but with dignity and intelligence, in accordance with both our religious precepts and the laws of our country.

We uphold the First Amendment of the US Constitution and the Canadian Charter of Rights and Freedoms. Both protect freedom of religion and speech, because both protections are fundamental to defending minorities from the whims of the majority.

We therefore call on all Muslims in the United States, Canada and abroad to refrain from violence. We should see the challenges we face today as an opportunity to sideline the voices of hate-not reward them with further attention-by engaging our communities in constructive dialogue about the true principles of Islam, and the true principles of democracy, both of which stress the importance of freedom of religion and tolerance.

To recap, these Muslim leaders are speaking out against a hateful and unrepresentative minority, who, contrary to what The American Muslim asserts are the true tenets of Islam, threaten violence against those who offend the religion.

This is virtually the same message that clergy of all stripes sent when they denounced Pastor Terry Jones's plan - abandoned at the last minute - to burn Korans on September 11. Well, there is one notable difference: The American Muslim and its statement's signatories are speaking out against violence (or the threat thereof), whereas the statement against Jones's stunt was simply speaking out against a fully lawful and protected form of speech.

You would think the media would be eager to promote efforts to preserve the First Amendment, given that the press depends on the freedoms guaranteed there. You would be wrong.

Last week, Molly Norris, a cartoonist for Seattle Weekly who had devised "Everybody Draw Mohammed Day" as a protest of threats of violence directed at South Park creators Trey Parker and Matt Stone, went into hiding. The threats against her life by fanatics bent on silencing her become too serious. And yet, the press was silent.

The Washington Examiner wrote in an editorial on Monday:

When The Examiner asked the American Society of News Editors for a statement on the issue, none was forthcoming. This despite the fact that the first sentence of ASNE's Web site describes its mission as supporting "the First Amendment at home and free speech around the world." We got a similar response from the Society of Professional Journalists, despite its dedication "to the perpetuation of the free press as the cornerstone of our nation and liberty."

Freedom of speech and press are in deep trouble when the American government thinks the best it can do to protect a journalist from death threats is to counsel her to go into hiding, and when the elite voices of American journalism can't be bothered to say anything in her defense. But it's actually worse than that. The New York Times' Nicholas Kristof thinks Muslims are owed an apology. "I hereby apologize to Muslims for the wave of bigotry and simple nuttiness that has lately been directed at you," he wrote Sunday. "The venom on the airwaves, equating Muslims with terrorists, should embarrass us more than you."

Instead of telling the rest of us that we're all bigots, shouldn't Kristof and the rest of the journalism profession be outraged by what has happened to Molly Norris?

Yes, it should. But it's not. Even the Washington Post, which published a story on page A3 hyping the condemnation of Jones's Koran burning by various clergymen, simply could not find the print space to note that American and Canadian Muslims have roundly rejected the very real violent, authoritarian tendencies in parts of the Muslim community.

(The Post did get around to mentioning Norris...in the context of fretting that various commentators had "used it as yet another opportunity to take broad swipes at Muslims.")

The double standard is palpable.

I recieved the following email from SPJ spokesman Andrew Scott on Wednesday, September 29, claiming that the excerpt from the Examiner editorial quoted above is inaccurate:

In one of your reporter's recent blog posts on the Newsbusters website, Lachlan Markay cites an editorial commentary by the Washington Examiner/San Francisco Examiner. Unfortunately, their content is misleading and was most likely written to gain headlines/SEO. When previously offered, the Examiner did not accept SPJ Headquarters' contact information for the Society's Washington Pro chapter nor for our National President so that the Examiner could pursue any legitimate information or stand point from us.

It is important to note that their article was not a legitimate news piece with factual sources, but opinion focused.

Below I've included content our National President, Kevin Z. Smith has recently posted in response to other entries that quoted the Examiner and criticized the two journalism groups. I have posted this content to other articles such as yours that have come across this issue and have thus helped us to fix this inaccurate report.

I'm sending it to you now as proof that the Society does in fact support Molly Norris. We are hoping you will utilize this factual information as an addendum in your entry or as a separate updated entry, clarifying the false information as posted by the Examiner.

"SPJ did issue a statement of support for Norris and that statement appears in at least one publication in Seattle.

'SPJ has always stood behind First Amendment rights of expression whether they originate with the the press, a group or from individuals. Most citizens in our country understand that free speech has protection, even if it is offensive to some segments of society. Editorial commentary, even in the form of cartoons, has long been a staple of the American press. It can engage and enrage people as it provokes thought and fosters debate. That's it's purpose. Cartoonists know that better than anyone. Add Norris' name to the long list of journalists who agitate in order to make a statement. She should have protection and she has our support.'

SPJ represents 8,000 journalists in this nation and abroad. We are rarely silent on First Amendment issues."

But the Examiner posted the following on Wednesday in response to this email (apparently sent to others as well):

In this newspaper's Sept. 20, 2010, editorial entitled "Government and journalists cower at threats to cartoonist" concerning the plight of Seattle News cartoonist Molly Norris, we noted that The Examiner asked the national office of the Society for Professional Journalists (SPJ) if it had made a public statement on the issue. We were told that no national statement had been made, but that one "might" be available if we requested it. We were also told to contact the Western Washington state SPJ chapter for further comment.

Since our primary question had thus been answered - no statement had been made by the national SPJ office prior to our Sept. 19 inquiry - the fact that one "might" subsequently become available if we requested it was irrelevant and we demurred. And since we were only concerned whether the national SPJ office had previously commented on Norris, contacting the state chapter was similarly irrelevant...

Scott's assertions are factually incorrect and misleading. We stand by our Sept. 20 editorial.

A Google search reveals no results for the SPJ statement before September 21, the day after the editorial was published. Unless new information regarding the factual accuracy of either the SPJ's or the Examiner's claims comes to light, NewsBusters will not be issuing a correction.