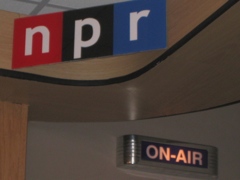 Words matter. They speak volumes about issues. So when individuals or groups try to change the words associated with a heated political issue, take note and take care.

The folks at National Public Radio understand the power of words. Managing Editor David Sweeney announced yesterday that the station would no longer refer to people in the abortion debate as "pro-choice" and "pro-life." Instead, the station will say "abortion rights advocates" and "abortion rights opponents," according to a memo circulated to NPR staff.

In making this change, NPR is shifting the terms of the debate to make it more friendly to the pro-choice position.

Being pro-something sounds much nicer than being anti-the other thing. So while the pro-choice and pro-life labels may not be particularly profound -- neither group is anti-choice or anti-life, after all -- they do convey each side's position on a level playing field. One believes women should be able to choose whether to keep a pregnancy, the other believes that even the unborn have an inviolable right to life.

Is NPR planning on referring to advocates of gun control as "gun rights opponents"? As the Cato Institute's David Boaz wrote earlier this month,


In 415 NPR stories on abortion, I found only one reference to ‘abortion advocates,' in 2005. There are far more references, hundreds more, to ‘abortion rights,' ‘reproductive rights,' and "women's rights.' And certainly abortion-rights advocates would insist that they are not ‘abortion advocates,' they are advocates for the right of women to choose whether or not to have an abortion. NPR grants them the respect of characterizing them the way they prefer.

I called Sweeney to ask him if NPR was going to change its terminology concerning gun rights. He did not return my call (I will post an update if he does).

NPR has chosen stilted terminology that conveys pro-choicers and pro-lifers in positive and negative lights, respectively. The station could just as easily (though perhaps with less aesthetic appeal) have labeled the two groups "pro-rights of the unborn" and "anti-rights of the unborn."

But NPR apparently does not see it that way. The station's staff sees the issue -- and now frames it on air -- as a battle over women's rights, not the rights of the unborn.

"We call them pro-abortion rights and anti-abortion rights because it's the right to abortion that we're talking about," said CBS Senior VP Linda Mason, as quoted by Sweeney. "What does pro-life mean? That leaves people scratching their heads."

Well, it certainly leaves the folks at CBS and NPR scratching their heads -- which says a lot about their preconceived notions on the debate.

But is it really that difficult of a concept? Even the unborn have a right to life. "Pro" means for, so "pro-life" means "for life." Simple. But the liberal media have trouble with that concept, and it shows in their reporting.

With its new guidelines, NPR has instructed its staff to frame the abortion issue in a way that is far more friendly to the liberal-Democratic side of the debate.