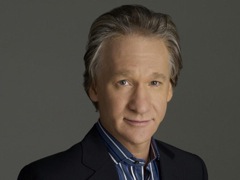 The left's comedic mud-slingers have been working overtime lately. Bill Maher injected his latest bit of invective Friday when he labeled the Tea Party movement a "cult" and hurled epithets at major conservative figures.
Angry that Americans would dare object to his particular brand of ultra-liberal politics, Maher has recieved a bit of press lately for his unending stream of hatred for anyone who disagrees with him.
He consistently mocks Sarah Palin and her son Trig. And he certainly has a lot of disdain for the American people--you know, the ones who "love the troops the way Michael Vick loves dogs" and are "not bright enough to really understand the issues."
So Maher's latest bit of vitriol on HBO's "Real Time" - reserved for Americans who have the gall to voice their political principles - was hardly a surprise (video embedded below the fold with partial transcript):

The teabaggers, they're not a movement. They're a cult, and I'm going to prove it. You know someone has fallen into a cult if you see these signs: One. Cults have their own vocabulary. Now, I don't speak sh**kicker, but I know that in their world, freedom means guns, diplomacy means weakness, elitist means reader, and socialist means black.
Two. Cults tend to populate from within.encouraging members to have huge broods of children and to give them strange names, like Moonbeam, and Trig.
And three, cult members always attribute all of their problems to one simple explanation: [picture of Obama with Hitler moustache].