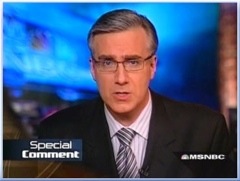 Keith Olbermann's appeal has generally been his incendiary, attack-dog approach to the news. The approach paid off during the Bush administration when bashing the president was good business for a television host.

Since Obama's inauguration, Olbermann's ratings have been in free-fall, but MSNBC brass are still more than willing not only to keep him on the air, but to defend him against any and all critics.

Griffin added, "there are times when politics does great, and there are times when it doesn't." Apparently there are also times when it does great on Fox, but not on MSNBC, like, say, right now. Ratings for the "O'Reilly Factor", Olbermann's 8 p.m. competition, have soared 55 percent during the past year, making it by far the most watched cable news show during that time slot. "Countdown", meanwhile, languishes just behind HLN's Nancy Grace in the coveted 25-54 demographic.

"Griffin is simply trying to put the best possible spin on the fact that he and his network are losing the media war - badly," Bevan wrote.

During the past month a number of prominent media commentators--if you can call Jon Stewart a commentator--have been highly critical of Olbermann's over-the-top attacks on Republicans and conservatives. His colleague Joe Scarborough called his vitriolic rant against Scott Brown "sad and pathetic." Stewart mocked Olbermann for it on his "Daily Show".

A report on the sad decline of "Countdown" during the past year from DailyFinance's Jeff Bercovici led Olbermann to dub DailyFinance a "right-wing site" during his "Worst Person" segment. Such knee-jerk reactions only seem to have reaffirmed Olbermann's descent into name-calling and ad hominem attacks. Bercovici, for his part, responded,

Keith, I don't know what went into your decision to lie about us on your program. I don't know whether you've ever actually read anything on DailyFinance, or whether one of your producers just prepped a script for you and you performed it. But stuff like this is why people like Jon Stewart and me increasingly have questions about your intellectual honesty and integrity. Knock it off already.

Bercovici wasn't alone, however, in noting that "the world may not have quite as much need of--or patience for--Olbermann and his shtick as it once did." Andrew Malcom of the Los Angeles Times concluded his commentary thusly:

"In the immortal words of Edward J. Smith, captain of the Titanic, 'What iceberg?' "