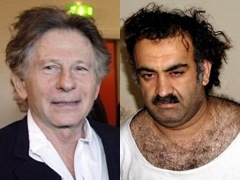 Hollywood liberalism has some strange priorities. During the last couple months, two high-profile criminals have been slated to face justice in American courts. The first drugged and raped a young girl in 1977. The second orchestrated the most deadly attack against American civilians in our nation's history.

Decisions to try them in the United States were controversial, but a petition against the extradition of the former, director Roman Polanski, garnered over 130 signatures. Included on the list were such illustrious film personalities as Woody Allen, Martin Scorcese, David Lynch, and Wess Anderson.

It is often said that a picture is worth a thousand words. Well, a picture of Hollywood politics consists of 137 names. Nothing more is needed to demonstrate the bizarre moral outlook that would condemn the United States so strongly for trying a convicted sex offender and fugitive from justice in our civilian courts, yet show such little interest in trying a man who has admitted to slaughtering 3,000 civilians in an act of war mere blocks from where he wrought his devastation.

Attorney General Eric Holder’s decision to try the 9/11 mastermind and four other terrorists in a civilian court, rather than by the military justice system, should not be allowed to remain without challenge. Not only does it put the national security of the United States of America at risk, but it is a travesty of our justice system. It brings additional heartache to the families and friends of the 9/11 victims, the first responders, and the concerned citizens of New York whose lives were changed forever.

This is not just a New York tragedy, but a terrorist threat to our country and freedom loving people around the world. It provides a platform for these terrorists to spew their propaganda and hatred to the world from a courthouse just blocks from Ground Zero.

We stand with 9/11 families, New York City’s first responders and the U.S. military who will be forced to cope with the consequences of this dangerous decision if it is not reversed.

The seven souls who signed onto this petition express a deep concern for the consequences of the administration's decision, both in terms of national security and the ideological fight against violent extremism. The 'Free Polanski' petition (translated from French), on the other hand, speaks with horror of the notion that international film festivals might not be insulated from the world of, you know, justice.

By their extraterritorial nature, film festivals the world over have always permitted works to be shown and for filmmakers to present them freely and safely, even when certain States opposed this.

The arrest of Roman Polanski in a neutral country, where he assumed he could travel without hindrance, undermines this tradition: it opens the way for actions of which no-one can know the effects.

Roman Polanski is a French citizen, a renown and international artist now facing extradition. This extradition, if it takes place, will be heavy in consequences and will take away his freedom.

Filmmakers, actors, producers and technicians - everyone involved in international filmmaking - want him to know that he has their support and friendship...

If only in the name of this friendship between our two countries, we demand the immediate release of Roman Polanski.

This petition's concern for international security and law extends only to the contention that film festivals are somehow disconnected from reality. The signatories' concern that Polanski's arrest "opens the way for actions of which no-one can no the effects" only begs the question of how many other film-festival attendees need to worry about being arrested and extradited.

The petition's daft lament that Polanski's arrest "will be heavy in consequences and will take away his freedom" is laughable. That one would need to inform these individuals that drugging and raping a 13-year-old girl and then fleeing the country might have those side-effects demonstrates their total disconnect from reality.

Maybe it is the complete ignorance of justice--not American justice but simply an ignorance of the concept--that left the KSM petition with a tepid seven signatories. After all, if it is so shocking that Polanski might be arrested and returned to the country from which he fled to face the consequences of his unspeakable crime, perhaps it does not seem so outlandish that a man responsible for slaying thousands of Americans--a man who is unrepentant and plans on using the trial as a platform to voice his hateful views--be tried in the same court as shoplifters and speeders.