Shep Smith Is Objective Because He Agrees With Left? 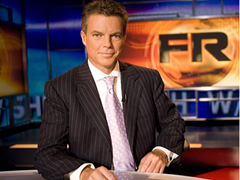 Too often "objectivity in journalism" is code for agreeing with the left. The Washington Post's Howard Kurtz demonstrated this sentiment in his profile of Fox News Channel's Shep Smith.

Kurtz lauded Smith as an "outspoken newsman at the network defined by high-decibel conservatives, a stance that has earned him respect even from some Fox-hating liberals."

But was it really his "newsman" status that has earned him this respect, or is it the numerous instances in which Smith has agreed with the left? Kurtz documents a number of such instances, intended to demonstrate Smith's purported objectivity.

During the runup to the last presidential election, Smith berated Joe "the Plumber" Wurzelbacher for accusing Obama of not taking a hard enough stance on Israel. "Barack Obama has said repeatedly and demonstrated repeatedly that Israel will always be a friend to the United States no matter what happens once he becomes president -- his words," Smith said.

Lest readers take Smith's defense of Obama's Israel policy as a show of objectivity, consider that only six percent of Israeli Jews consider Obama "pro-Israel," while half think he is "pro-Palestinian." Quality journalism must entail a critical look at a candidate's policies, not just a regurgitation of his talking points. But Kurtz still considers this quality reporting.

Smith has also toed the liberal line on health care. "Every vote against the public option is a vote for the insurance companies," he said in an October interview with Sen. John Barrasso, R-Wyo. Such hyperbole is hardly a hallmark of objectivity.

On detainee interrogation, Smith also sides with large swaths of the left. He erupted in a fit of rage during a Fox roundtable in April, screaming "We are America! I don't give a rat's a** if it helps. We are America! We do not f***ing torture!" Smith apparently is emotionally invested in many of the left's positions.

Smith has garnered praise from some of the left's most divisive commentators. New York Times columnist Frank Rich--who makes his living attacking Sarah Palin, Glenn Beck, and tea party protesters--lauded Smith for "refus[ing] to go along with the big hate." Praise from Frank Rich generally indicates a refusal to question the President or Democrats, as he is so quick to deride anybody who does.

All of the examples that Kurtz mentions demonstrate his standard for objective journalism: agreeing with the left. That a Fox News anchor opines for liberal policies does not make him objective. But when the mainstream media is dominated by liberals, a journalist espousing liberal opinion means he is doing his job.
Media Bias Debate 2008 Presidential Liberals & Democrats Double Standards Covert Liberal Activists Fox News Channel New York Times Studio B Washington Post Journalistic Issues