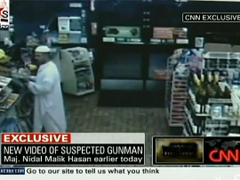 As reports of the Fort Hood shooting began to pour in yesterday, numerous news outlets neglected to mention that the shooter is a Muslim. Either the potential import of this fact was completely lost on these journalists, or they omitted the shooter's Muslim affiliations out of a concern for political correctness.

CBS and NBC both omitted the shooter's faith in their East Coast feeds last night, as reported by Brent Baker. The Los Angeles Times left key facts out of its report, published at 9:46 EST (which has since been edited), even though other other media outlets had reported them. Among these was that shooter Nidal Malik Hasan was Muslim, and that he had previously expressed on an Internet forum affinity for suicide bombers.

The Associated Press reported at 8:15 EST that Hasan had "come to the attention" of Army officials at least six months ago for these Internet posts.

The Times also noted the high number of suicides at Fort Hood this year, suggesting--though not stating outright--that the shooter could have been under tremendous mental strain.

Gen. Peter W. Chiarelli, the Army’s deputy chief of staff, has been leading an effort to reduce the number of Army suicides, which has climbed sharply this year, possibly as a result from long and repeated deployments to Iraq and Afghanistan.

Three of the four brigades of the 1st Calvary Division are in Iraq. The three brigades — the first, second and third — are on their third Iraq tour. The division’s newest brigade, the fourth, has done two tours in Iraq, returning most recently in June.

The Times did not mention, however, that Hasan was about to go on his first tour, a fact disclosed by Sen. Kay Bailey Hutchinson at roughly 6 PM EST. Hasan was reportedly very upset about his upcoming deployment, but the Times gives the impression that the mental strain endured by servicemen overseas for extended tours could be a possible motive, failing to note that Hasan had not been deployed.

As Patterico reported last night, "the L.A. Times story on the shooting has no mention of the shooter’s religion, his alleged rants against U.S. involvement in Iraq, his alleged approval of suicide bombings, or the allegations that he was shouting something in Arabic as he shot." These are all vital facts to the investigation, as they may indicate motive in Hasan's slaughter of 13 at the base.

With the exception of the shooter's Muslim faith and his "alleged approval of suicide bombings," these facts were not widely reported on until today. But as of 1:10 PM EST the Times still does not mention the many new--and disturbing--facts that have come to light.

According to military personnel present during the shooting, he shouted "Allahu Akbar"--Arabic for "God is great"--before opening fire.

The Times also leaves out reports from a retired Ft. Hood colonel who claims he heard Hasan say he was "almost sort of happy" about the shooting of an Army recruiter in Little Rock, Ark (see Patterico post).

NPR reported today that Hasan gave a lecture on the proper Muslim ritual for the beheading of an infidel. "It seemed to be his own beliefs. That’s what a lot of people thought," one attendee stated, adding, "people actually talked in the hallway afterwards about 'is he one of these people that’s going to freak out and shoot people someday?' "

While none of these facts are proverbial smoking guns in the country's efforts to discover the motives for the shooting, they all indicate a strong resentment of the military, and an affinity for anti-American violence. They are at least worthy of a mention in reporting the story.

Perhaps the Times will notice these new--and revealing--facts as they come to light and continue to update their story accordingly. Readers only ask that they own up to their politically correct instincts and admit when they left out facts critical to understanding the incident.

Facts have steadily streamed in, and there was an air of confusion shortly after the shooting. But the Times shied away from covering some of the more damning details of the shooter's life, even when those facts were reported by other sources. It seems that the Times joined the ranks of CBS and NBC in choosing the politically correct avenue rather than reporting the inconvenient facts that could give readers insight into the shooter's motives.
Iraq War on Terrorism Military Islam Anti-Americanism Afghanistan Crime Bias by Omission Fort Hood Shooting CBS NBC Los Angeles Times NPR Nidal Malik Hasan