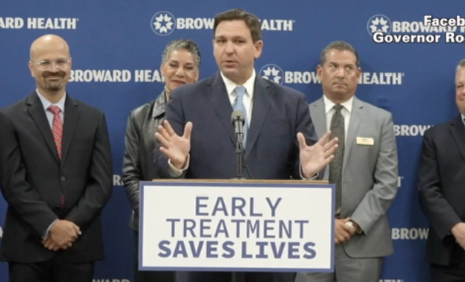 On Monday, CNSNews Blog Editor Craig Bannister reported on far-left Congresswoman Alexandria Ocasio-Cortez and her liberal media buddies, like MSNBC anchor Joy Reid, “accusing Republican Florida Governor Ron DeSantis of being on ‘vacation,’ and nowhere to be found during a pandemic.” However, as the article noted, they got their facts wildly wrong: “DeSantis was actually on the job – except for the day he took off to be with his wife during her chemotherapy treatment.”

Following AOC’s nasty tweet claiming DeSantis had “been inexplicably missing for like 2 weeks,” Reid eagerly piled on and “tweeted that Gov. DeSantis was ‘sunning his belly on vacation’ instead of carrying out his duties, declaring that ‘@GovRonDeSantis is the Nero of Ted Cruzes.’” Bannister explained: “At a Monday press conference, Gov. DeSantis responded to the accusations by noting that all of his activities had been posted on his office’s public calendar – for all the world to see – except for the one day he spent by his wife’s side at her cancer treatment.”