On her 9:00 a.m. ET hour show on Tuesday, NBC anchor Megyn Kelly slammed Stormy Daniels attorney and prospective 2020 Democratic presidential candidate Michael Avenatti for making unsubstantiated “outrageous allegations” against Brett Kavanaugh. The morning show host thought the claims were so irresponsible that she told viewers “they will not be repeated here.”

“Can I just tell you, it makes me feel so sad that this is the state of our country....You’ve got Michael Avenatti, who is making outrageous allegations,” Kelly remarked as she led a panel discussion about Kavanaugh. She acknowledged that if Avenatti’s allegations were true, it would disqualify Kavanaugh, however, she also suggested a punishment for Avenatti if the accusations were false: “If they’re not true, then Michael Avenatti should lose his right to appear on television. His accusations are so outrageous they will not be repeated here.”

So what were these claims that Avenatti was pushing? On Monday, Hot Air detailed the bizarre assertion that Kavanaugh ran a gang-rape ring in the 1980s.

On Tuesday, Kelly explained that Kavanaugh, during a Fox News interview Monday night, flatly denied involvement with any such criminal conspiracy. She forcefully added:

Moments later, PBS In Principle host Amy Holmes noted: “And I think it’s important to note that Senate Democrats have come out and said that Mr. Avenatti’s claims are not helpful. That if he has information, he needs to do it the right way, submit it to the Judiciary Committee to have it properly investigated.”

Unfortunately, MSNBC and CNN did not share Kelly’s journalistic standards, since both cable channels provided Avenatti with a forum to launch his nasty attack Monday night.

Here is a full transcript of the September 25 panel discussion on Megyn Kelly Today:

MEGYN KELLY: Wow, a lot to unpack there. Can I just tell you, it makes me feel so sad that this is the state of our country. You know, you’ve got those accusations, you’ve got him denying it. You’ve got Michael Avenatti, who is making outrageous allegations. If they’re true, there’s no way Brett Kavanaugh can or should be confirmed to the Supreme Court. If they’re not true, then Michael Avenatti should lose his right to appear on television. His accusations are so outrageous they will not be repeated here. Kavanaugh was asked about them last night and he denied them. But Avenatti’s been out there trying to tease people that he’s got some third accuser with the most incendiary claims of all. 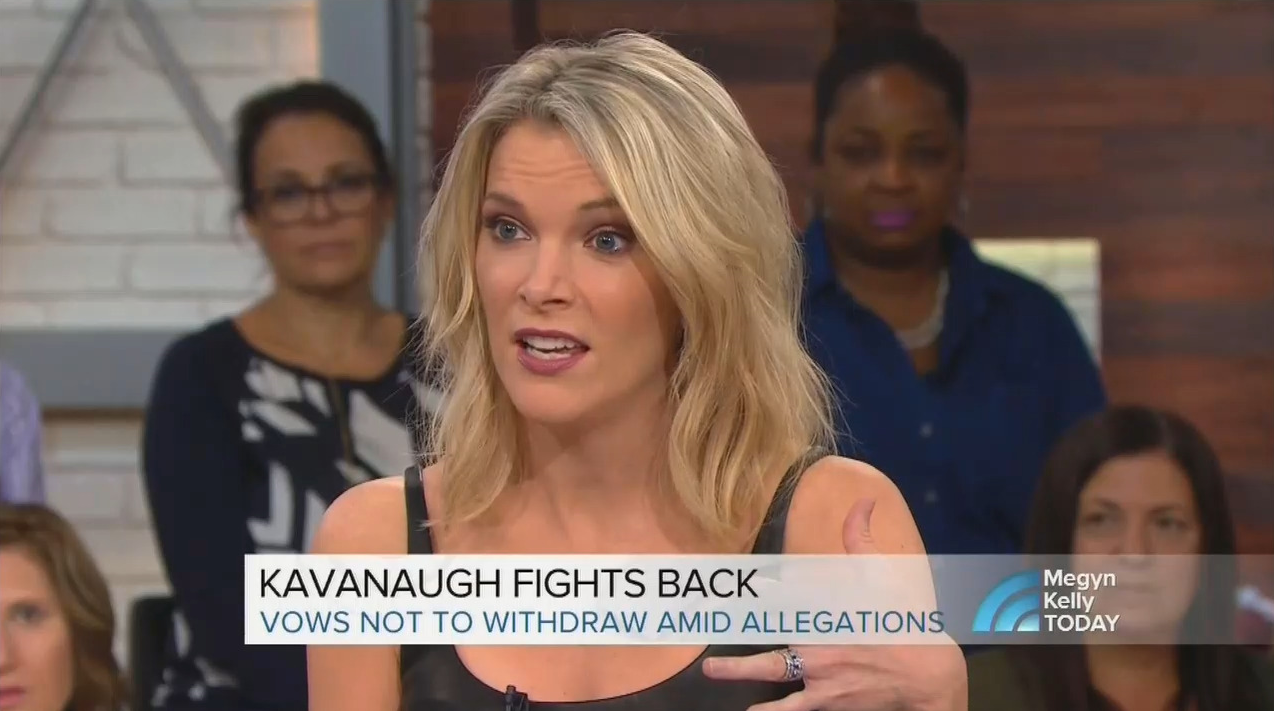 But this has become, as I said yesterday, so politicized. Ted Cruz and his wife got shouted right out of a restaurant last night. I mean, violent, violent shouts at him and his wife in a way that you could see that his wife was jarred. Saying, “Vote no on Kavanaugh!” You know, “Women must be believed!” Women are entitled to a fair hearing. Not necessarily to blanket belief upon making the accusation. That’s what we’ve been fighting for. And the whole thing just leaves me feeling so uncomfortable.

AMY HOLMES [CO-HOST, PBS IN PRINCIPLE]: Very uncomfortable. I watched the interview last night with Shannon Bream and I have to tell you –

HOLMES: Oh, sorry, Martha MacCallum. And I have to tell you, it was just so intense and so uncomfortable. The moment where he was sharing those very private details about his sexual history.

KELLY: Because she had to ask him about the Avenatti claims.

KELLY: And in which – I’m not going to repeat them, but it was directly responsive to those claims.

HOLMES: And I think it’s important to note that Senate Democrats have come out and said that Mr. Avenatti’s claims are not helpful. That if he has information, he needs to do it the right way, submit it to the Judiciary Committee to have it properly investigated.

But you know, I do want to underscore here that there are still a lot of Americans that haven’t made up their minds. A new poll came out on Sunday that found that 38% of female voters, for example, believe Professor Ford more, but 28% believe Kavanaugh. And 34% are undecided.

KELLY: Yeah, they have no idea.

JACOB SOBOROFF: I can’t tell what the polls say. But in – and Washington, D.C. is certainly not my beat, I spend more time reporting between the coasts than in Washington D.C. But I can tell you what American people think, and they think that this is terribly, terribly sad. There’s a reason that Americans distrust Washington, D.C., and this is it. This is the Supreme Court of the United States that we’re talking about. It’s the future of all of us, all together. The same thing you were saying yesterday, and you hit the nail on the head. It has become so completely political, something so extraordinarily serious has become a joke to – or basically a political football. Every little incident in Washington D.C.

KELLY: The Republicans have already made clear they don’t believe her, so we’re basically going to have a show trial, if anything, on Thursday. The Democrats have made clear that they do believe her, no matter what happens on Thursday, too. So we have to go through this exercise and I believe it’s worthwhile for the American public to see Dr. Ford testify, to Brett Kavanaugh, Judge Kavanaugh testify. I still think it’s worthwhile. But let’s not fool ourselves that she – that anybody listening to either of these parties is an open-minded arbiter. I don't believe that.

CRAIG MELVIN: But wouldn’t you also contend that, in addition to the senators having their minds made up, the average American has probably made up his or her mind, as well, before Thursday? And I think that should trouble all of us.

KELLY: And he deserves a chance to respond.

HOLMES: And in fact, a lot of people haven’t made up their minds. Polling is showing this. And what they see on Thursday may tip the balance and it may put pressure on senators on each side, in terms of how to vote. Because remember, senators represent us. They are our representatives, too.

KELLY: This, as it stands right now, my own predication is the ball won’t be moved significantly one way or the other because there’s no – there’s not going to be definitive proof one way or the other in a case that’s 35 years old. And then, Deborah Ramirez’s case, she – the one who says he allegedly exposed himself at a college – drunken college party.

MELVIN: Now the White House is open to having her testify publicly as well.

KELLY: But Deborah Ramirez doesn’t even – she can’t even actually say it was Brett Kavanaugh, she didn’t actually see who did it. She heard somebody say it was Brett Kavanaugh, he denies it. We’re talking 35 years ago, there’s not gonna be the smoking gun. We’re probably not going to know that more on Thursday. All of this is to help the Senate in its duty to advise and consent the President on its up-or-down vote on this nominee.

MELVIN: But I think you hit the nail on the head once again. I don’t think a lot of people realize that even if Kavanaugh’s voted down, the man or woman who is nominated, will be, politically, a lot like Brett Kavanaugh.

KELLY: Absolutely. In fact, if you’re Trump, you’re gonna pick somebody farther to the right. And you’re gonna try to rush it through if you’re Mitch McConnell running the Senate. And I think people – Democrats who believe they’re gonna flip the Senate in the midterms and then take back control and get a liberal justice in there, first of all, President Trump still gets to appoint the person, so it’s not going to be a liberal justice. So best-case scenario is a moderate. But the truth is, all the data show Republicans are more motivated by midterm elections and open seats on the Supreme Court than Dems are.

HOLMES: On the Supreme Court issue.

KELLY: Yeah, on the Supreme Court issue. So be careful – be careful what you wish for, right? Be careful.